Swiss to vote on tightening gun laws, with EU relations in the balance 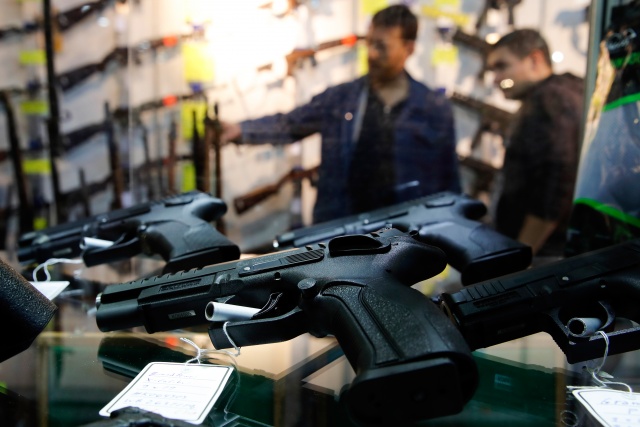 (FILES) In this file photo taken on March 29, 2019, handguns are displayed during the 45th edition of the Arms Trade Fair, in Lucerne. The Swiss will vote on May 19, 2019, on whether to bring the country's gun laws in line with EU legislation, with the government warning a 'no' could threaten relations with the bloc. A demand from the neighbouring European Union that Switzerland toughen its gun laws has prompted a rare national debate over firearm ownership in the wealthy Alpine nation, which has a deeply-rooted gun culture. (STEFAN WERMUTH / AFP)

(AFP) - The Swiss will vote Sunday on whether to bring the country's gun laws in line with EU legislation, with the government warning a 'no' could threaten relations with the bloc.

A demand from the neighbouring European Union that Switzerland toughen its gun laws has prompted a rare national debate over firearm ownership in the wealthy Alpine nation, which has a deeply-rooted gun culture.

While the government has cautioned that the new legislation is crucial to maintaining an array of treaties with the EU, the proposal sparked a fierce pushback from the gun lobby and shooting enthusiasts, who gathered enough signatures to trigger a vote under Switzerland's famous direct democratic system.

Brussels changed its own weapons laws two years ago following a wave of deadly terrorist attacks across Europe, slapping bans on certain types of semi-automatic firearms.

Switzerland is not an EU member, but it is bound to the bloc through an array of intricately connected bilateral agreements.

Bern has cautioned that a "no" vote would entail Switzerland's exclusion from the visa-free Schengen travel region and the Dublin accords regulating Europe's asylum-seeking process.

This would have far-reaching consequences for security, asylum and even tourism, and would cost the country "several billion Swiss francs each year," it said.

Most of the arguments for changing the law are economic, in a country that has rarely seen the kind of mass shootings that have happened in other countries.

Philippe Miauton, of the chamber of commerce and industry in Vaud Canton, told the RTS broadcaster that turning down the law change could bring "many consequences that would be harmful".

"Switzerland is not an island... We need the bilateral agreements, and that means making concessions," he said.

Voters appear to have heeded the warnings. According to the most recent gfs.bern poll, a full 65 percent of respondents supported the law change, compared to 34 percent who opposed it.

The shooting enthusiasts behind Sunday's referendum say the government warnings are "exaggerated".

Brussels has "no interest" in excluding Switzerland from Schengen's information-sharing system regarding criminality and terrorism, Olivia de Weck, a Swiss army capitan and the vice president of the ProTell gun lobby, told AFP.

Changing the law would "erase the right to own weapons" in Switzerland and be "completely useless in confronting terrorism", said the campaign, which has the backing of the country's biggest political party, the populist rightwing Swiss People's Party (SVP).

It is difficult to know exactly how many firearms are in circulation, since guns are registered regionally and there is no national registry.

But according to a 2017 report by the Small Arms Survey, the country boasts the world's 16th highest rate of gun ownership, with some 2.3 million firearms in civilian hands -- nearly three for every 10 inhabitants.

Under the new gun law, which has already been approved by legislators, semi-automatic weapons with high-capacity magazines would be listed as "banned".

Such weapons would still be available for purchase by collectors and sports shooters, as long as they obtain an "exceptional authorisation".

Collectors and museums would also need to provide a full list of the "banned" weapons they own, and indicate their plan for safe storage.

Sports shooters would also need to prove at regular intervals that they are still actively practising the sport to justify their need to own such weapons.

Those opposed to the law change claim it amounts to an "EU dictate" and is reining in Swiss sovereignty.

But Lisa Mazzone, vice president of the Green Party, said that to the contrary, the new law indicated that Switzerland was intent on gaining more control over the situation.

It will allow "improvements in the tracing and the marking of firearms. In terms of security, it is obviously a good thing to have a better overview of what weapons are in circulation," she told AFP.

The strong gun culture in Switzerland is partially tied to the country's tradition of national defence service.

Most Swiss men undergo obligatory military service, consisting of three weeks of service each year between the ages of 18 and 30. They are allowed to keep their assigned weapon when they are done.

Shooting clubs and competitions are also an integral part of life for many, and the country subsidises "young shooters" classes for any interested citizen between the ages of 15 and 20.

Gregory Barthassat, an 18-year-old taking part in one of the classes in Geneva, says he comes from a family of gun-owners who like taking trips to the shooting range.

He is practising with an FASS 90 -- an assault rifle issued by the Swiss army and a favourite among sports shooters. This one has the automatic function deactivated, as is required when the gun passes into civilian ownership.

If the new law passes, people will still be permitted to hold onto their army-issued FASS 90 at the end of their military service without additional permit requirements.

But if they want to pass on the weapon to a family member or sell it, it will be listed in the "banned" category.

Barthassat told AFP he worries that "if this law passes, it will be much more difficult to buy weapons and to do sports shooting".