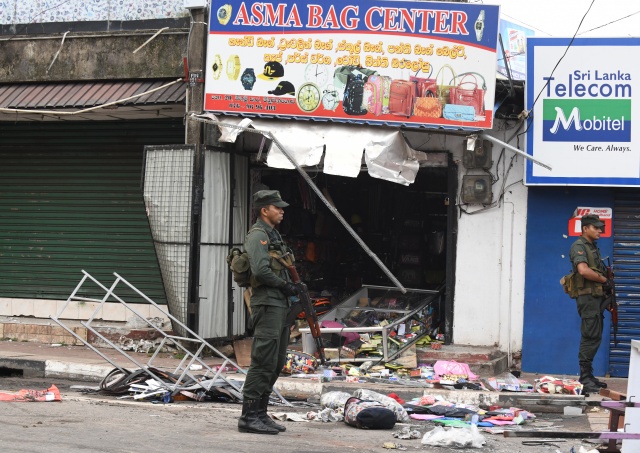 A Sri Lankan soldier looks on as he stands guard by a damaged shop after a mob attack in Minuwangoda on May 14, 2019. A Sri Lankan province north of the capital was under indefinite curfew on May 14 after the first death in anti-Muslim riots in the wake of the Easter terror attacks, police said.(LAKRUWAN WANNIARACHCHI / AFP)

Police spokesman Ruwan Gunasekera said 78 people arrested in the worst-affected North-Western Province (NWP) were remanded in custody Wednesday, while the rest were detained after a manhunt in other areas.

Some 5,500 additional police were deployed in NWP to contain the violence that claimed the life of a Muslim man on Monday. Scores of private homes, Muslim-owned shops and businesses were destroyed, while several mosques were also vandalised.

Muslims in Sri Lanka have been bracing for revenge attacks since three churches and three luxury hotels were bombed by local Islamist extremists on April 21, killing 258 people.

Gunasekera said a night curfew was being reimposed in NWP, just north of the capital, as well as the adjoining Gampaha district, which shares a border with Colombo, as a measure to "maintain peace".

However, a top police source said there will be no curfews elsewhere in the country. The entire country was under night curfews for two straight days after the violence escalated.

The night curfew on Tuesday ensured there was no repeat of Monday's violence against Muslims, who make up some 10 percent of Sri Lanka's population of 21 million.

"There were no incidents of violence overnight and we are arresting groups of people responsible for taking part in mob attacks."

More police and army units were seen deployed in the troubled areas as the authorities lifted the nationwide curfew on Wednesday morning.

But Muslims in NWP remained nervous and stayed indoors Wednesday, after sword-wielding rioters killed one man late Monday while vandalising scores of shops and mosques.

In Bingiriya, where some 2,000 people went on the rampage, Muslim cleric M.I.M. Siddeeque said the community was worried.

"Our people are still afraid to go out," he told AFP by telephone.

Government spokesman Navin Dissanayake said the authorities had identified the leaders of the mobs and they were already in police custody.

Despite the extraordinary security measures, the minorities felt insecure, said Dissanayake, who is also a government minister.

"People feel insecure and I acknowledge that," Dissanayake told reporters in Colombo. "We have given the armed forces of this country... a complete free hand to tackle the security situation."

Among those detained was Amith Weerasinghe, a man from Sri Lanka's majority Buddhist Sinhalese community and on bail for his role in similar riots in March last year in the central Kandy district.

Another was identified as Namal Kumara, a deserter from both the army and the air force.

The police, meanwhile, also made several changes in the command structure by removing senior officers in the troubled areas after allegations officials did nothing to stop the rioters.

The military released CCTV which showed a man in uniform apparently standing by while a mob pelted stones at a home, and sought public help to identify the individual.

"The attacks on mosques, the burning of houses and shops, the attacks on innocent people cannot be condoned in any way," Jayasuriya said in a statement.

The attacks came during the Muslim holy fasting month of Ramadan.

A state of emergency has been in place since the Easter bombings and security forces have been given sweeping powers to detain suspects.