Amnesty urges ICC to probe 'crimes against humanity' in Venezuela 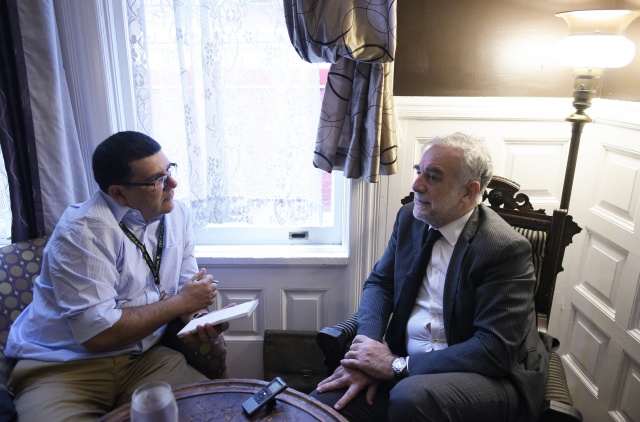 Luis Moreno Ocampo, former prosecutor for the International Criminal Court (ICC), speaks during an interview with AFP reporter Aldo Gamboa in Washington, DC on September 13, 2017. The hearings that will be held at the OAS to investigate whether crimes against humanity have been committed in Venezuela are an unprecedented step and with a "single mandate," said Ocampo, on Wednesday.(Mandel Ngan / AFP)

(AFP) - Amnesty International said Tuesday it believes the Venezuelan authorities have committed crimes against humanity in their crackdown on anti-government protests, and urged the International Criminal Court to investigate.

Maduro opponents were tortured and killed during the protests, it said.

"The nature of the attacks... the level of coordination by the security forces, as well as the signs of similar patterns in 2014 and 2017, leads Amnesty International to believe that the Venezuelan authorities committed crimes against humanity," Amnesty said in a statement.

Guaido is locked in a bitter power struggle with Maduro, who has presided over a spiraling political and economic crisis in Venezuela since taking over from late leftist leader Hugo Chavez in 2013.

Maduro was re-elected to a second term in May 2018, in a vote boycotted by the opposition and rejected by much of the international community.

Guaido, the leader of Venezuela's opposition-controlled legislature, declared himself acting president on January 23, calling Maduro's re-election illegitimate. The opposition leader has since been recognized by more than 50 countries, led by the United States.

Amnesty sent a fact-finding mission to the country in February to research the crackdown on the anti-government protests that preceded and followed Guaido's swearing-in.

The London-based rights group said at least 47 people were killed during the protests from January 21 to 25. At least 33 were shot dead by the security forces, and six by government supporters.

"Eleven of these deaths were extrajudicial executions," said Erika Guevara, Americas director for Amnesty International, who presented the report in Mexico City.

"State forces identified people who had been prominent in the protests in their communities, located them and shortly afterwards killed them.... Some of them were tortured before they were killed," the report said.

More than 900 people, including children, were arbitrarily detained over the same period, it said.

It called on the UN Human Rights Council and International Criminal Court to investigate.

Amnesty's team found that crimes and human rights violations were committed in "an attack planned and led by the security forces against individuals identified as or perceived to be opponents, particularly in impoverished areas."

Maduro himself "knew about these public and appalling acts and took no measures to either prevent or investigate them," it said.

Despite economic collapse and international isolation, Maduro has so far retained the support of Venezuela's powerful military. Guaido has meanwhile been fighting to keep up the pressure on the embattled socialist leader since the opposition's bid to spark a military uprising fizzled on April 30.