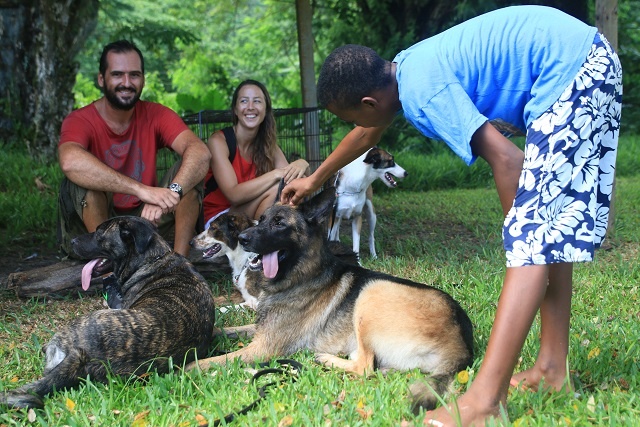 (Seychelles News Agency) - A new law to protect dogs and manage the stray population in Seychelles was assented to by the island nation’s President, Danny Faure, in a ceremony on Thursday at State House in Victoria.

Under the law, dogs will have to be registered and micro-chipped and receive their medallion. Owners will be fined if their dogs are found roaming or have been dumped in public areas.

For the first time in Seychelles, the protection of dogs is included in the law, including how these pets are kept at home and if they are being well taken care of and receiving necessary care.

“The new law identifies various actions and measures to effectively manage stray dogs, improve efficiency and sustainability of control measures as well as fulfil the biosecurity obligation,” Charles Bastienne, the Minister for Fisheries and Agriculture, said at the ceremony.

The Control and Protection of Dogs Act 2018 will come into force on September 1.

“We are giving enough time to people to do the necessary. We will launch three camps during June, July and August at no cost where the public can have their dogs sterilised. By then our dog pound will be up and running, the microchips and medallions will be in the country and officers would have all been trained,” said Bastienne.

Encouraging responsible dog ownership is a vital part of the newly assent Act. The Act clearly defines and outlines the roles and responsibilities of government agencies, public and private landowners and other community members in managing dogs in Seychelles.

A series of regulations pertaining to the Act will go before the Cabinet of Ministers for approval. The regulation will state how many dogs a person can keep, the cost for registration and licence, requirements for keeping a dog and the breeds of dogs to be considered as dangerous among others.

Bastienne said that the new Act “is a very important instrument and is evidence of the government's commitment to reduce the number of stray dogs in and around town, at tourism establishment and within our communities.”

The preceding Act dated back to 1982 and the minister said that it did not adequately address the issues and nuisances associated with dogs in Seychelles and did not make provisions for the protection of dogs.

“There was also the indiscriminate breeding or mixing of dangerous dogs haphazardly on one hand while natural breeding led to the overpopulation of dog. Furthermore, the abandonment of puppies and adults led to large populations of stray dogs and the spread of animal diseases by those dogs was a real threat to the society,” he added.

The final draft of the proposed legislation was presented to the National Assembly where further debates and changes were made. The Act was approved by the legislative body in December 2018.

Enforcement and implementation of the new law will be supported by the Animal Welfare Unit under the veterinary division of the National Biosecurity Agency. Private animal welfare organisations such as the Seychelles Society for the Prevention of Cruelty to Animals (SSPCA), Pet Haven and Paw Links Veterinary Care services will also provide their support.

Training will be provided to officers who will be enforcing the law and the government are making sure that certain required facilities will be put in place on Mahe and Praslin.

General » Be a reporter: Write and send your article » Subscribe for news alert
Tags: Control and Protection of Dogs Act 2018, Seychelles Society for the Prevention of Cruelty to Animals, National Biosecurity Agency

Campaign to register dogs in Seychelles kicks off; goal is to reduce strays