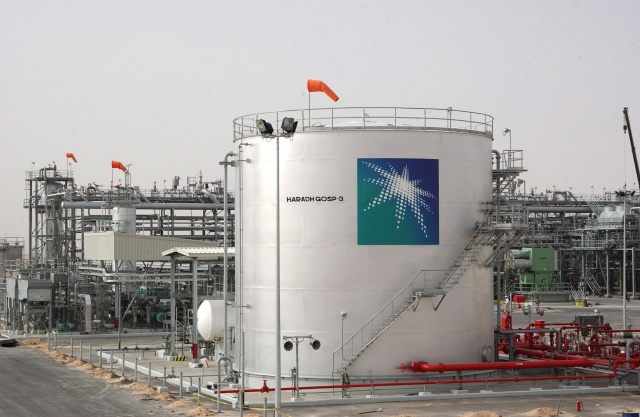 (FILES) This file photo taken on March 22, 2006 shows a general view of oil tanks at a plant in Haradh, about 280 kilometres (170 miles) southwest of the eastern Saudi oil city of Dhahran, following its inauguration launching a project adding 300,000 barrels of oil to the kingdom's daily production capacity. Two pumping stations on a major Saudi oil pipeline were attacked by drones on May 14, 2019, halting the flow of crude along it, Saudi Energy Minister Khalid al-Falih said. He said the attacks on the pipeline from the oil-rich Eastern Province to the Red Sea took place early in the day. Yemen's Huthi rebels said that they had targeted several vital Saudi targets with drones. (AFP)

(AFP) - Saudi-led coalition warplanes bombed Yemeni rebel targets including in the capital on Thursday following insurgent drone strikes on a key oil pipeline that Riyadh said were ordered by its arch-rival Tehran.

The new bombardment came after the UN envoy, who has been spearheading efforts to end more than four years of conflict in the Arab world's poorest country, warned against sparking further escalation.

The Saudi deputy defence minister said that Tuesday's attack by Yemeni rebels on a major pipeline in his country was "tightening the noose" around peace efforts.

The Saudi-led coalition, which has been battling the Huthi rebels since March 2015, confirmed that its warplanes were carrying out multiple strikes across rebel-held territory in Yemen.

"We have begun to launch air strikes targeting sites operated by the Huthi militia, including in Sanaa," a coalition official, who declined to be identified, told AFP.

The coalition said it had hit "a number of legitimate military targets" that the rebels used to store munitions.

The rebels' Al-Masirah television said the coalition carried out at least 19 strikes, 11 of them in the capital.

A strike on one Sanaa neighbourhood killed six people and wounded 10, Dr Mokhtar Mohammed of the capital's Republic Hospital said.

Aid group Doctors Without Borders (MSF) said that at least four people were killed and 48 injured in Sanaa in "several airstrikes" by the Saudi-led coalition.

The UN's humanitarian office OCHA later said five children had been killed and 16 more had been wounded in the strikes.

An AFP correspondent saw one residential building that had been reduced to rubble. Residents were using their bare hands in a desperate search for survivors.

"Death to America, death to Israel," they chanted, unsure whether a child they pulled out was still alive.

The rebels said their attack on the Saudi pipeline was a response to "crimes" committed by Riyadh during its bloody air war in Yemen, which has been criticised repeatedly by the United Nations and human rights groups.

The drone strikes further raised tensions in the region after the mysterious sabotage of several oil tankers and the US deployment of an aircraft carrier strike group and B-52 bombers to the Gulf over alleged threats from Iran.

The speaker of Kuwait's National Assembly said the risk of a war breaking out in the region was high.

"The situation in the region is not reassuring and calls for preparing for all possibilities," Marzuk al-Ghanem told reporters following a closed-door meeting.

An official from state oil giant Aramco told AFP Thursday the pipeline had been reopened and was "fully operational".

"The attack by the Iranian-backed Huthi militias against the two Aramco pumping stations proves that these militias are merely a tool that Iran's regime uses to implement its expansionist agenda in the region," he wrote on Twitter.

Riyadh and its allies intervened in Yemen in 2015 to bolster the government of President Abedrabbo Mansour Hadi after the Huthis seized much of the country including the capital Sanaa.

Coalition-backed forces have retaken much of the south but the capital and most of the populous central highlands remain in rebel hands.

A grinding war of attrition has set in, turning third city Taez and the vital Red Sea aid port of Hodeida into key battlegrounds.

In December, UN mediators brokered hard-won truce deals for both cities during talks in Sweden but the hoped-for momentum in talks on a comprehensive peace has failed to materialise.

On Tuesday, UN observers confirmed that rebel fighters had pulled out of three Red Sea ports including Hodeida.

But the next day, three women were killed in clashes in the city, a doctor at Al-Thawra hospital told AFP.

UN envoy Martin Griffiths welcomed the pullback, but warned the Security Council on Wednesday that the risks of a slide back into fighting remained high.

"There are signs of hope," he said, but there are also "alarming signs" of further violence.

More than four years of conflict have triggered what the UN describes as the world's worst humanitarian crisis, with over 24 million people, more than two-thirds of the population, in need of aid.

General » Be a reporter: Write and send your article » Subscribe for news alert
Tags: Yemen, conflict