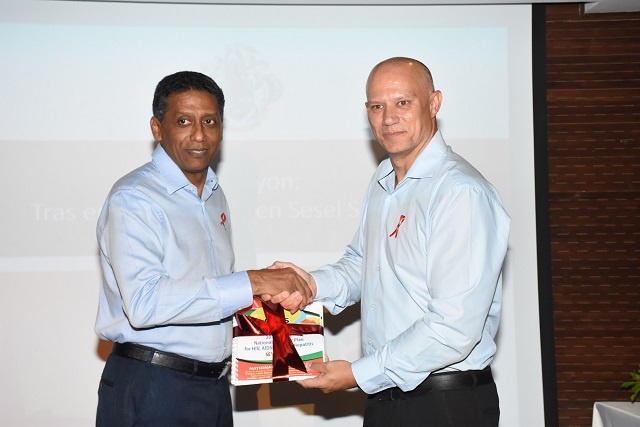 President Faure received a copy of the documents at the launching ceremony on Friday. (Joena Meme)

(Seychelles News Agency) - That was the message from the Seychelles’ President Danny Faure on Friday at the launching of a national strategic plan for HIV/AIDS and viral hepatitis.

“It is very sad to learn that people are still dying from HIV/AIDS in Seychelles. This epidemic is touching our society as a whole. It is sadder to learn that those infected have died earlier because they have failed to take their treatment,” Faure said.

The ceremony was held at the Savoy Hotel in the northern Mahe district of Beau Vallon.

“We need to put more resources in place to fight against this epidemic. Everybody in Seychelles should get tested to know their status. If found positive, we should never be afraid to seek treatment as it is offered for free in Seychelles,” said Faure.

HIV -- human immunodeficiency virus -- attacks the body’s natural defence system and as a result, the body cannot fight infection and disease. AIDS, which stands for acquired immune deficiency syndrome, is the final stage of infection with HIV. Not everyone with HIV develops AIDS.

In his address, the minister of health, Jean-Paul Adam, said that the plan is important for everyone as HIV/AIDS touches the lives of everyone.

“I urge everyone this afternoon to join together to recommit ourselves to a Seychelles where there are no new HIV/AIDS cases, where everyone knows their status, where stigma is never tolerated, where treatment and counselling are available to all. These are the pillars on which this plan rest,” said Adam.

The minister said that through a pilot project, the health ministry is making available self -administered tests allowing individuals to test themselves and know their status.

An overview of the current HIV/AIDS situation in Seychelles, a group of 115 islands in the western Indian Ocean, was given by the chief executive of the National AIDS Council, Anne Gabriel.

“There has been an increase in the percentage of new cases as the number of newly diagnosed HIV cases stood at 112 for 2017. Another trend that we have noted is that in 2017, most cases stemmed from drug abuse, while in 2018, the majority of cases seem to be through sexual intercourse. In 2018 we also had 23 cases of AIDS which are in the advanced stage and there were 19 HIV and AIDS-related deaths in 2018,” said Gabriel.

Gabriel added that there have been 18 HIV positive pregnant women giving birth and out of this number, three babies were infected.

The Seychelles response to HIV/AIDS began 30 years ago. The first HIV infection was detected in 1987 while the first case of AIDS was reported in 1993.

The HIV epidemic remains one of the major public health and development challenges in Seychelles. In 2018, there were 120 new cases reported.