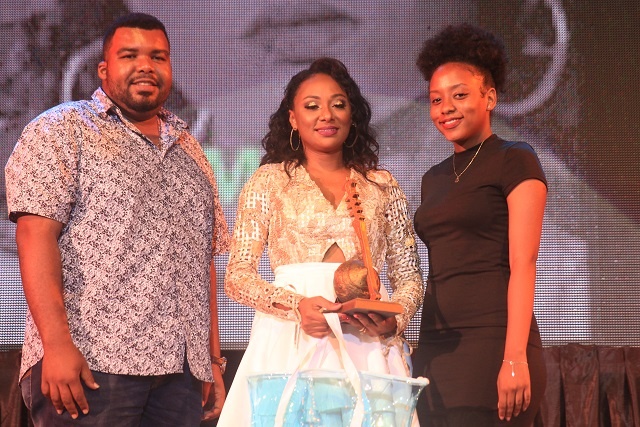 There were around 50 nominees vying for the prestigious awards in ten categories during the red-carpet ceremony, which lasted nearly two hours.

Mia, 32, whose real name is Mina Telemaque, a newcomer on the music scene, launched her first album ‘Prezan’ last year. It immediately made her a household name in the island nation.

She was nominated in three categories: Best Collaboration, Best Female Artist and Best Song for 2018.

Speaking to SNA after the event, an emotional Mia told SNA that winning the award was overwhelming.

“It was a tough competition as there were well-established artists in this category. I worked so hard and was so committed and today I’m extremely pleased with my work,” said Mia.

Mia said it took her two years to release her first album. Although she was discouraged at times, she persevered. Her advice to other young female artists who are trying to make it in the music business is “ to persevere, stay focused and work towards their goals.”

It is this album that propelled him to the top in 2018, despite having released the album at the end of November, a month short of the deadline for the Takamaka award.

Extra Big, whose real name is Herrence Etienne, was not present to accept his award and it was his colleague, Jahrimba who accepted the award on his behalf.

Étienne is the owner of the music studio Extra Big Sound Seychelles. This is the second time he has won the Best Male Artist award.

In a telephone interview with SNA, Extra Big said he was very surprised.

“I didn't expect this album to make such an impact in such a short time. I think being a producer myself has helped me a lot. I listen to what my fans say and what they want to hear from me and I give them just that,” he said.

The singer, who is presently gearing up for a live performance on June 1, said he is still promoting his latest work and has thanked his loyal fans for believing in him and for their continued support.

At Friday’s Takamaka Award ceremony, another renowned singer, Jahrimba, walked away with the Award for Best Song for 2018 –‘I kas Zot Leker.’

Sandra, a two-time winner of the Airtel Music Award, won Best Interpretation for 2018 with her rendition of Joseph Louise’s ‘Mord Li’.

The Honorary Award which recognises an artist who has made a significant contribution towards music development in Seychelles, an archipelago in the western Indian Ocean, went to Celine Dine. Dine was popular in the 1990s with her hit song ‘En Roz I bezwen lapli’.

There was also a People’s Choice Award which went to Nara.

The ceremony’s organiser, Terry Carolla, said he was satisfied with the whole show.

“I think it was well-executed and everything worked in our favour, despite having only two months to put the whole event together. I have a solid team with years of experience and I am proud of my team and what they delivered,” said Carolla.

He said moving forward the Music Award Seychelles plans to add more categories to the ten existing ones to make it more interesting and to encompass all types of music produced in the island nation.