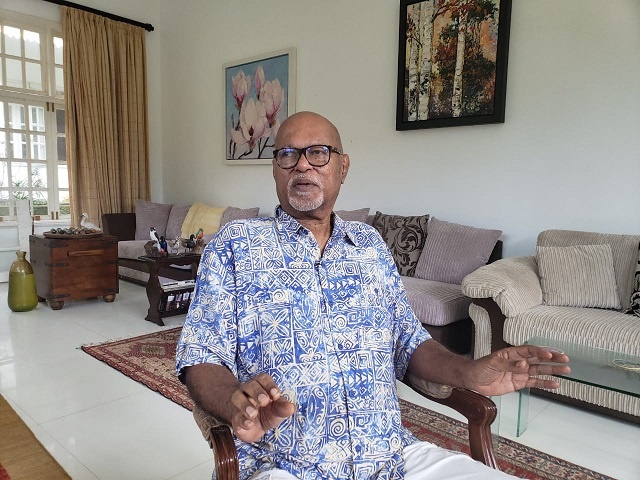 Patrick Pillay is the current leader of the Lalyans Seselwa party. (Rassin Vannier)

(Seychelles News Agency) - As Seychelles gets ready for a presidential election next year, SNA is seeking the views of the island nation's political leaders.

Our third interview in the series is with Patrick Pillay, the leader of the Lalyans Seselwa party.

SNA: Ahead of next year’s presidential elections, what is the state of the Lalyans Seselwa party, its positioning and membership?

PP: The only constant thing in life is change and all political parties, be it in Europe, Africa or even Seychelles, change with time. Yes, we have had top party officials namely our secretary general and treasurer, who have opted to leave to pursue other personal plans. But we have some newcomers as well.

As the leader of Lalyans Seselwa, I have a vision for Seychelles. I firmly believe that Seychelles can prosper and be a gem if only we have leaders that can put Seychelles and its people before their own personal interests.

Since it was created in 2015, Lalyans Seselwa has always held its convention annually to elect a leader. We are yet to do it this year. If I am elected at the convention to lead the party then I will gladly continue in this role. I believe in democracy and not autocracy. Therefore, I cannot nominate myself and choose my running mate and impose my autocratic belief on the party. Unfortunately, this is what some political parties in Seychelles are doing.

Our party is a democratic party, our Constitution is strong. We are reviewing our manifesto to make it more relevant today and our emphasis this time around is on our territorial integrity, that Seychelles remains for Seychellois.

SNA:  The party won over 8,500 votes in the presidential elections in 2015. Do you believe the party still has that kind of support, four years down the line, and can you make it without LDS (Linyon Demokratik Seselwa)?

PP: Our party is still strong. There are rumours that we have joined another political party. This is not the case. Our party will always stand for truth, righteousness and democracy. These are our cornerstones.

I explained why we left LDS last year and this still stands. Our philosophy is not compatible with theirs. I can cite some examples. Firstly, the regional council which our party is against.

The initial plan that Lalyans agreed on was to have a District Council where anybody who was willing to stand could do so and become a councillor for their district. But what did we see? People were nominated. This was undemocratic, unconstitutional and illegal. It is not in line with the spirit of truth, justice and democracy that we believe in.

Secondly, we are talking about this new chapter in Seychelles’ politics. We, therefore, need to show statesmanship. You cannot say that you want to lead Seychelles as a politician. Post-2020, Seychelles will not need a politician as president but a statesman.

How can you be a statesman and boycott the funeral service of a former president? Regardless of what your views are, you need to be respectful. That’s what being a statesman is about. You cannot enjoy all the privileges that come with the function, including your salary which is paid for by the taxpayers’ money and yet fail to respect what your office stands for. This is unacceptable.

SNA: When Lalyans Seselwa divorced from LDS, its members in the National Assembly opted to remain with LDS. Has there been any discussion to get them to return to the fold?

PP: No, we haven’t had that discussion. I respect a person’s choice. There are some that I firmly believed were loyal enough to stay with our party but they decided to remain with LDS. It could be they thought the other leader was more reliable and could bring about the change more than I could.

Some have approached me through a third party to ask me to return in the opposition coalition but I have refused. Lalyans Seselwa is comfortable where it is at present. We are an opposition party, fighting for change, an inclusive party and we have no intention of joining LDS.

SNA: If Lalyans Seselwa nominates you as its next presidential candidate, will you take up the challenge again?

PP: Definitely. As I’ve said earlier, this does not depend on me but on the party. And I have always said that I will stand for one mandate of five years and then make way for other leaders within the party. The party is holding a recruitment drive to get new blood.

I strongly believe that I can bring about the change that Seychelles needs. If for three years, 1986-1989, I could change the organisational culture of the Polytechnic school and for a year and a half changed the way things were being done in the National Assembly, you can imagine what I would be able to do in a five-year mandate.

Seychelles does not need money or gold. What the country need is leadership.

SNA:  Are you up for the job seeing that you were recently hospitalised?

PP: In politics, there’s a game called a whispering campaign. Every time I am hospitalised there are rumours that I am very ill. I just turned 70. The Indian Prime Minister, Narendra Modi, is a year younger than me. Sheikh Mohammad Bin Rashid Al Maktoum of Dubai will be 70 in July. They are still running their country. What makes people think that I will not be able to do the same?

SNA: What will be your party’s manifesto at the next presidential elections?

PP: We have ten points on our list this time around. Firstly, our territory. I would like to challenge the leaders to find out which islands are ours and which are not. What has happened to the Assumption Island? Was there an agreement and if so what are the conditions set out. Does Platte belong to Seychelles or not? We want an audit of all the island and we would like to see a total restructuring of the Islands Development Company (IDC) which is mandated to manage our outer islands. Every time IDC comes up in the National Assembly everybody goes quiet as if we are all scared.

Secondly, to speak frankly about issues affecting the country’s economy. I’m referring to the recent announcement of a rise in salaries for both the public and private sectors. A raise will definitely not affect a big company but have we looked at the impact on small and medium-sized companies. How would a small company employing 20 workers find the money to pay for the increase? We should put the economy before politics and not politics before the economy.

Thirdly, discipline. There is a ‘laissez-faire’ attitude in Seychelles where people feel they have the right to do whatever, whenever they feel like. Take the issue of alcohol sales and advertising for example. There’s been a lot of talks about the matter but very little action so far. We just keep appointing high-level committees to keep on talking about the issue. Within one month I would have asked all the shops to remove all advertisements on their shop. The drinking culture will not end overnight but we need to start somewhere. We need to have concrete measures in place to address issues such as drink-driving and people who consume alcohol in public.

Another example is drug abuse. It seems that everybody knows who is dealing drugs and yet no actions are taken against the traffickers. Around the world, countries like Singapore and Dubai, that have succeeded and been able to maintain law and order, have done so because of discipline and leadership.

SNA:  In the last parliamentary election, the opposition parties came together to win a majority in the National Assembly. Do you think it will be easy for Lalyans Seselwa to contest the elections alone or will the party join other political parties?

PP: I believe it will be easy. A newly-formed party -- One Seychelles -- has already approached us to discuss how we can work together but we haven’t formed any alliances so far. We remain as Lalyans Seselwa with our own identity.

However, I do believe that more political parties will be created ahead of the presidential elections. Of course, having so many small parties fighting against those big parties with more money to campaign might be a disadvantage. Lalyans Seselwa does not get a contribution from the government compared to United Seychelles and LDS, which get SCR 750,000 ($55,000) monthly.

So eventually I believe the way forward would be for the small opposition parties to come together and remove those that are misleading the people and pretending to stand for democracy. Lalyans will not be able to do this alone so yes we will be talking to those who are interested to talk to us to bring about democracy, justice and truth.

The Interview » Be a reporter: Write and send your article » Subscribe for news alert
Tags: Lalyans Seselwa party, District Council, One Seychelles