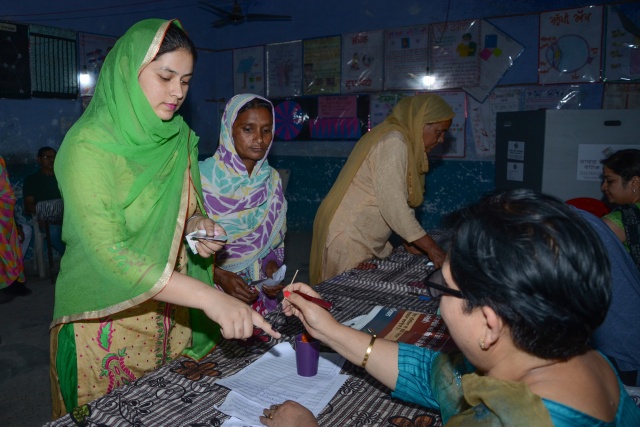 An Indian election officer (R) marks the finger of a voter at a polling centre on the outskirts of Amritsar on May 19, 2019, during the 7th and final phase of India's general election. Voting in one of India's most acrimonious elections in decades entered its final day on May 19 as Hindu nationalist Prime Minister Narendra Modi scrambled to hang on to his overall majority. (NARINDER NANU / AFP)

(AFP) - Voting ended Sunday in India's most acrimonious election in decades, one that will decide whether Hindu nationalist Prime Minister Narendra Modi gets a second term in power.

As the final polling booths closed, a huge security cordon was thrown around the voting machines and boxes of paper ballots used for the world's biggest election before the official count starts on Thursday.

The opposition Congress party was predicted to more than double its 2014 tally of 42 seats. The polls have in the past been notoriously unreliable, however, adding to the political jitters.

Tens of thousands of police and paramilitaries were on duty in West Bengal state -- a symbol of the mounting tensions between the BJP and opposition parties during the six weeks of voting that has focused on Modi's record since his landslide win five years ago.

Long queues formed outside polling stations across the eastern state but the BJP and its rivals again accused each other of using violence, fraud and intimidation.

An improvised bomb was thrown at one Kolkata polling station and security forces intervened to stop BJP, communist and other groups blocking different booths across the state capital that was hit by two days of street battles last week.

Conjoined twins Sabah and Farah voted in the city of Patna in eastern Bihar state and 102-year-old Shyam Saran Negi, who has taken part in every vote since independence in 1947, cast his ballot in mountainous Himachal Pradesh state, highlighting the huge diversity of the exercise.

Modi's constituency in Varanasi, the Hindu holy city in northern Uttar Pradesh state, was also among those to vote.

Most attention has focused on the BJP campaign to project Modi's strongman image, playing up recent cross-border air strikes against Pakistan.

The opposition, led by Congress and its leader Rahul Gandhi, have accused him of pursuing divisive policies, neglecting the economy and leaving many farmers in ruin.

Modi and Gandhi have hurled near daily insults at each other with the prime minister calling his rival a "fool" while Gandhi derides Modi as a "thief".

The animosity has taken a toll on voters.

"All the abuse and misconduct claims suggest that standards in Indian politics have slipped badly," Asit Banerjee, a history teacher in Kolkata, said as he queued to vote.

"Endless mudslinging and bitter comments pervaded the campaign. We are losing hope in a democracy. It is time for a reset," the 60-year-old told AFP.

Writing in the Hindustan Times, political commentator Karan Thapar said Modi's message "played on our insecurities and strummed upon our deep inner fears". He said Gandhi's campaign was "not great".

The 68-year-old held 142 rallies across India during the campaign, sometimes five a day, but pollsters predicted before Sunday that the BJP could lose a big chunk of the 282 seats it won in 2014.

On Saturday Modi, dressed in a long robe and saffron sash, trekked to a Himalayan shrine to meditate. Images showed him seated on a bed inside a holy cave.

The Delhi-based Centre for Media Studies estimates that the outlay on this election could top $7 billion, making it one of the priciest contests globally -- with the lion's share of the spending by the BJP trying to woo India's 900 million eligible voters.

Lots of it has been spent on social media, where the parties used armies of "cyber warriors" to bombard India's hundreds of millions of Facebook and WhatsApp users with messages.

Fake news and doctored images abounded, including of Gandhi and Modi having lunch with Imran Khan, prime minister of arch rival Pakistan, or of a drunk Priyanka Gandhi, a politician and the sister of Rahul.

Gandhi, 48, has tried several lines of attack against Modi, in particular over alleged corruption in a French defence deal and over the plight of farmers, as well as on the economy.

Modi's government has fallen short on creating jobs for the million Indians entering the labour market every month, while the shock introduction of a cash ban in 2016 disrupted livelihoods, and Indian banks are struggling with huge bad debts.

General » Be a reporter: Write and send your article » Subscribe for news alert
Tags: India, Vote