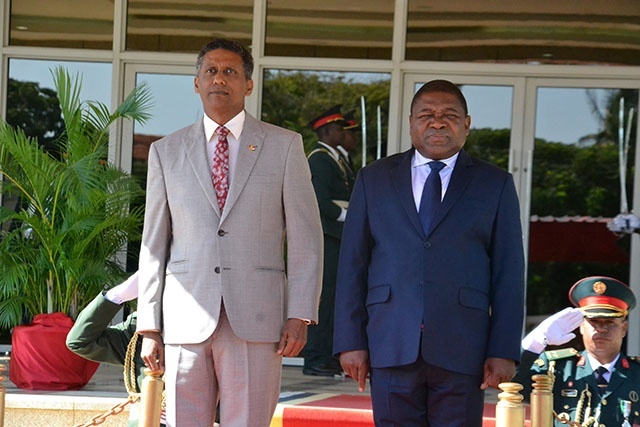 President Danny Faure was received on Monday at the presidential palace by his Mozambican counterpart Filipe Nyusi. (Presidency of Mozambique)

(Seychelles News Agency) - The President of Seychelles, Danny Faure, is on a state visit to Mozambique which is aimed at reviving cooperation between the two countries.

Faure, who arrived in the capital Maputo on Sunday, is the first president of the island nation to make a state visit to the south-east African country. He was greeted on arrival by the Mozambican Foreign Minister José Condunga Pacheco.

The Seychelles’ president was greeted on Monday by 21 cannon shots before meeting with Mozambican President Filipe Nyusi.

During the visit, the Seychelles’ Minister of Finance, Maurice Loustau Lalanne, signed three cooperation agreements covering several areas, such as maritime safety, the fight against drug trafficking and air services.

"In Seychelles, we have a project to reduce fuel consumption by replacing it with natural gas, and given that Mozambique, which is close to Seychelles, it could reduce costs," said Loustau Lalanne.

Trade between the two countries amounted to about $2 million in 2018.

Seychelles hopes that this will change with the new air services agreement which is expected to bring in more investment opportunities in the tourism sector.

Mozambique hopes in return that its young students could benefit from the Seychelles' expertise in the field of tourism, through the hotel school which trains young people in the hospitality industry in the island nation.

Tourism is the top contributor to the economy of Seychelles, a group of 115 islands in the western Indian Ocean.

Seychelles and Mozambique which have maritime borders in the Indian Ocean, want to strengthen security in this region to fight drug trafficking.

President Faure, in his visit, wanted to bring the support of Seychelles to Mozambique after the African country was hit by the Hurricane Kenneth last month.

Faure called for work toward reducing the effects of climate change.

"We need to express our views and our hopes so that our children do not question our silence or our inability to put in place measures to reduce the negative impact of climate change,” said Faure.

Seychelles and Mozambique also have historical ties dating back to the colonial era. The first inhabitants of Seychelles were from Mozambique especially from the Makonde tribe, where the current president is from.

The two countries established diplomatic relations in 1983, after the visit of former Mozambican President Samora Machel to Seychelles in 1982.