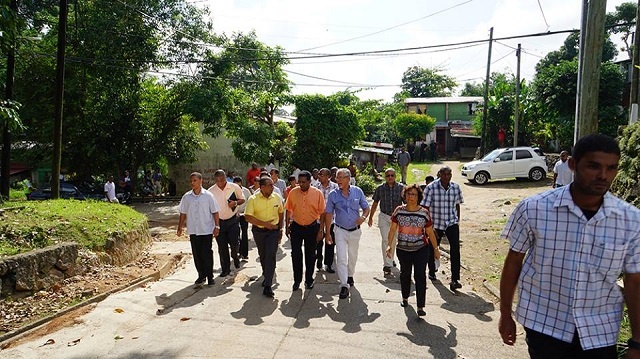 A Presidential visit at Corgat Estate in Mont Fleuri which is one of the central districts on Mahe where people living in poverty is the highest according to a 2013 survey. (State House, Facebook)

A survey by the National Bureau of Statistics found that 4,000 households in Seychelles are struggling and cannot afford to pay for basic necessities. The Multidimensional Poverty Index Survey on Poverty Alleviation released last week found that the families were having difficulty paying rent, utilities and buy food.

The islands of Seychelles boast world-class beaches and five-star luxury that attract an elite class of tourist. But the archipelago's tourism dollars aren't trickling down to the nation's poorest citizens: dozens of homes don't have electricity, indoor toilet facilities or treated drinking water.

The deputy chief executive of the bureau, Helena De Letourdis, said, “This shows that 32 percent of the population of Seychelles is multi-dimensionally poor and experiencing deprivation related to the standard of living, education, health, nutrition and employment.”

The minimum earnings in Seychelles, as per latest information released in March this year is around $1,000 a month. The survey results did not come as a surprise to residents SNA spoke with.

“As a pensioner, I know how tough life is as I am also paying a loan. Bills are always increasing and even though we all contribute towards expenses. We still struggle to buy food, which is also expensive,” said Caroline Ernesta of Beauvallon.

De Letourdis was making a presentation at a symposium last week to discuss the interventions to address this issue. According to De Letourdis different indicators were used for the survey, which was conducted from April 2017 to August 2018.

These included overcrowding, condition of the dwelling, access to electricity and safe drinking water, food consumption, substance use and abuse, teenage pregnancy, school attendance, unemployment and youth not in employment.

“The monitoring survey was done in phases at regional levels, targeting 5,910 specific homes with 22,215 inhabitants. Apart from looking at living conditions, the survey was also based on monetary standards as a benchmark to define poverty alleviation,” explained De Letourdis.

The survey was done on all the three main islands of Mahe, Praslin and La Digue of Seychelles – 115 islands in the western Indian Ocean. There are approximately 30,000 households on the island nation. Those chosen for the survey were households which the district authorities felt were living in poverty.

Key findings included 398 houses do not have treated water whilst 79 are without electricity. Sixty-eight homes were found not to have toilet facilities and 63 families are living in houses made from earth.

The principal policy analyst at the Poverty Alleviation Department, Ziggy Adam, explained that the findings of the survey will assist all ministries and other organisations concerned to come up with appropriate interventions.

“One thing which comes out across the board in the survey is the issue of housing,” explained Adam. The survey has found that up to seven people are living in a bedsitter.

“We had found people in extreme cases that we had to come up with interventions without having to wait for the final findings of the survey,” said Adam, who added that a rapid assessment team was set up for this purpose.

Adam elaborated by saying that all that is needed to address the issue is already in place. “We now have to put all our efforts in redirecting those in need to the right agency so that they can be assisted rapidly.”

SNA spoke to a few people to get their reactions over the findings.

Mark Nanon - a resident of Mont Buxton - said he is not surprised at all, “as these situations have existed for some time but these were kept hidden instead of being dealt with.”

“Am shocked! In this day and age, there are still people living in earth houses, with no toilets and electricity. Something must be done now, now, to address this inequality in a country where poverty was said to be a perception,“ said Daniella Marie – a marketing executive of Copolia.

The result from the survey will at the national level, provide the necessity for a possible review of existing policies of government departments and agencies whose mandates directly have an effect on parts of the dimension of poverty in the country.