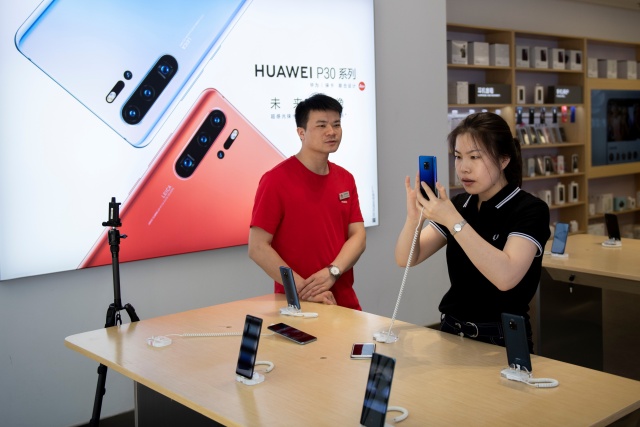 A store staff (L) attends a customer checking a Huawei smartphone in a store in Beijing on May 21, 2019. Huawei founder Ren Zhengfei on May 21 shrugged off US attempts to block his company's global ambitions, saying the United States underestimates the telecom giant's strength. (Nicolas ASFOURI / AFP)

(AFP) - US officials have issued a 90-day reprieve on their ban on dealing with Chinese tech giant Huawei, saying breathing space was needed to avoid huge disruption.

A Commerce Department filing said the delay does not change the ban imposed by President Donald Trump on national security grounds, an action with major implications for US and Chinese technology firms.

Instead, it grants a temporary license that will allow Huawei to continue doing business with American firms.

"In short, this license will allow operations to continue for existing Huawei mobile phone users and rural broadband networks."

The Huawei confrontation has been building for years, as the world's largest company has raced to a huge advantage over rivals in next-generation 5G mobile technology.

US intelligence believes Huawei is backed by the Chinese military and that its equipment could provide Beijing's spooks with a backdoor into the communications networks of rival countries.

For that reason, Washington has pushed its closest allies to reject Huawei technology, a significant challenge given the few alternatives for 5G.

Last week, President Donald Trump declared a "national emergency" empowering him to blacklist companies seen as "an unacceptable risk to the national security of the United States" -- a move analysts said was clearly aimed at Huawei.

At the same time, the US Commerce Department announced the effective ban on US companies selling or transferring US technology to Huawei.

It is the implementation of this ban that was delayed Monday by 90 days.

But the Huawei fight is over more than just US national security. Washington sees Huawei's rise as emblematic of China's drive to wrest global technological and economic leadership from the United States.

General » Be a reporter: Write and send your article » Subscribe for news alert
Tags: US, IT, telecom, security, China, Huawei