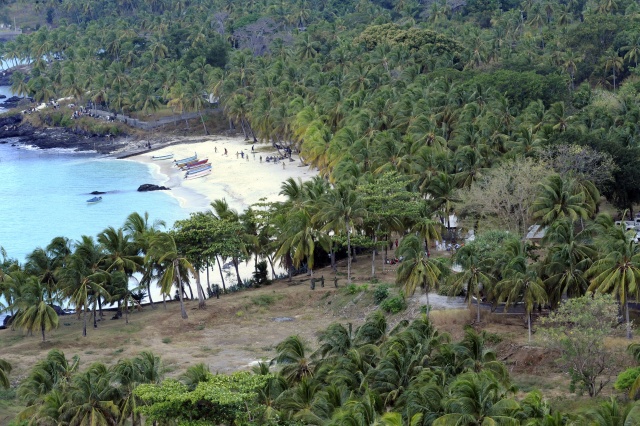 This aerial photo shows temporary medical posts set up on a beach in the north of Comoros on July 1, 2009 near to the site of a crash after a Yemenia airliner plunged into the water off the Comoros islands. The ill-fated Airbus A310 crashed on June 30 in the Indian Ocean with 153 people aboard. The plane crashed after having aborted a landing and was making a second landing. A 13-year-old girl is so far the only survivor among the 153 people on board the Yemenia airliner that plunged into the sea as it came in to land at Moroni airport. (AFP PHOTO/STEPHANE DE SAKUTIN)

(AFP) - For years, the Comoros islands off the east coast of Africa have dreamt of an oil or gas strike -- now the first planned seismic survey could reveal if the poverty-stricken nation's hopes are about to come true.

The possibility of a lucrative resources boom has gripped Comoros for seven years after then-president Ikililou Dhoinine awarded a batch of offshore oil and gas exploration permits.

Optimistic residents imagined a future where public coffers overflowed with petrodollars that funded a rapid economic transformation of a country rated among the 25 poorest in the world.

But any economic miracle has yet to materialise, with only uncertain clues pointing to possible oil or gas deposits 2,000 metres (6,600 feet) below sea level -- far beyond the financial means of small-scale exploration companies.

The arrival last year of Tullow Oil changed the game, as the British company boosts a strong record striking deposits in Ghana, Uganda and Kenya.

"We are gearing up for a modern 3D seismic survey," Alexander Mollinger, chief operating officer for Discovery Exploration in Comoros, told AFP.

"This will be the Comoros' first ever 3D seismic survey and represents a significant investment. It is the final exploration activity prior to deciding whether to drill an exploration well."

With the survey scheduled for later this year, the prospectors have reason to be confident -- the three blocks border on Mozambican waters where US giants Anadarko and Chevron, and Italian firm ENI have hit the largest gas deposits found in the past 20 years.

"There have been no oil or gas discoveries anywhere in the Comoros," said Mollinger.

"There is no certainty of any commercial accumulations of oil or gas, but we believe based on technical work that these blocks have significant potential."

Any discovery could transform the politically-unstable country, which is made up of three islands with a population of 800,000 and a per capita annual income of about $800.

The weak economy relies on exports of vanilla, clove and perfume essence, as well as foreign aid and remittance money sent home by overseas workers.

President Azali Assoumani, who was re-elected in March in a vote count rejected by the opposition, has put oil revenue at the centre of his development plans, vowing to make the Comoros an "emerging economy" by 2030.

"The first indicators give a lot of hope," he said during the election campaign. "If we have a united country, this oil can be a springboard for the country's economy."

However he added "oil is not an easy exercise... If we do not have people who can exploit it for the benefit of the population, it is useless."

Such promises to share the wealth have not convinced all in the Comoros, and Assoumani is regularly accused of corruption and a dictatorial style.

Foreign diplomats posted to Moroni express concern over how any discovery would be handled.

"If the project progresses, it could get the country out of poverty -- in theory," one told AFP. "But the requirements are huge for Comoros. A gas processing unit costs billions of dollars, and you have to have a credible financial system."

Though the survey has yet to begin, the political opposition are blunt in their verdict of how the president would treat any discovery.

"He sees the oil as his personal wealth, not for the country," said opposition leader Mohamed Ali Soilihi, warning that countries like Venezuela "are full of oil, but the people do not see the benefits".