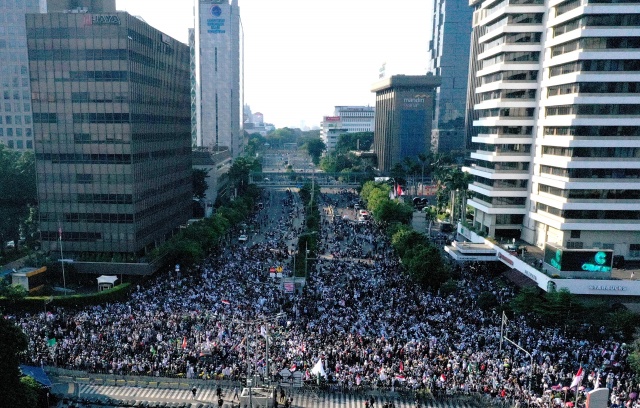 (AFP) - At least six people were killed as Indonesia's capital erupted in violence on Wednesday when police clashed with protesters opposed to the re-election of President Joko Widodo.

Dozens were arrested and parts of Jakarta were littered with debris and burned-out cars, as the violence triggered security advisories from the US and Australian embassies.

Authorities also restricted access to some social media in a bid to stop rumours and fake news from spreading online.

"Some had gunshot wounds, some had blunt force wounds but we still need to clarify this," he told reporters.

Jakarta's governor Anies Baswedan said earlier that about 200 had been injured.

The violence came after Indonesia's election commission on Tuesday confirmed Widodo had beaten retired military general Prabowo Subianto for the presidency in a poll held on April 17.

Subianto has said he would challenge the results in court -- as he did, unsuccessfully, against Widodo in 2014 -- but also warned his claims of widespread cheating could spark street protests.

That was borne out early Wednesday as protesters set market stalls and cars on fire while hurling fireworks and rocks at security personnel clad in riot gear and holding shields, an AFP reporter on the scene said.

Authorities blamed the violence on paid "provocateurs", citing money-filled envelopes found on some of nearly 70 demonstrators who had been arrested.

The early morning clashes started after several thousand Subianto supporters rallied peacefully near the election supervisory agency's office in the heart of the capital on Tuesday.

Later, roads were blocked off in parts of the sprawling metropolis -- with some shopping malls, businesses and schools also closed as small groups of protesters engaged in skirmishes with police.

"I open myself to anyone to work together to build and develop this nation, but I won't tolerate anyone who tries to disrupt public security, the democratic process or the unity of our... country," Widodo said at a press briefing, flanked by his chief security ministry and the head of the military

"We support people's constitutional rights (to protest) as long as they are civilised, peaceful and non-violent," he told reporters.

By Wednesday afternoon, a crowd of several thousand demonstrators had flowed into the city's business and commercial heart for a rally.

Election officials and analysts have discounted Subianto's claims, but many supporters appeared convinced of rampant cheating in the world's third-biggest democracy.

"We came here to demand justice because there was fraud in this presidential election," protester Mato told AFP.

"We don't want chaos, but that depends on the police," he added.

More than 30,000 troops had been deployed across the city in anticipation of unrest, and the elections commission office was barricaded with razor wire and protected by scores of security personnel.

"Avoid areas where demonstrations are occurring & exercise caution in the vicinity of any large gathering," the US embassy said on Twitter.

Elsewhere, hundreds took part in a peaceful rally over election cheating claims in Sumatra's Medan city, while a police station was torched in Pontianak on Borneo island.

The protests in support of Subianto have sparked a backlash online from opponents with the hashtag #Tangkapprabowo (#ArrestPrabowo) trending widely on social media.

Tensions have also spiked since police said last week that they had arrested dozens of Islamic State-linked terror suspects who had planned to cause chaos by bombing protests.