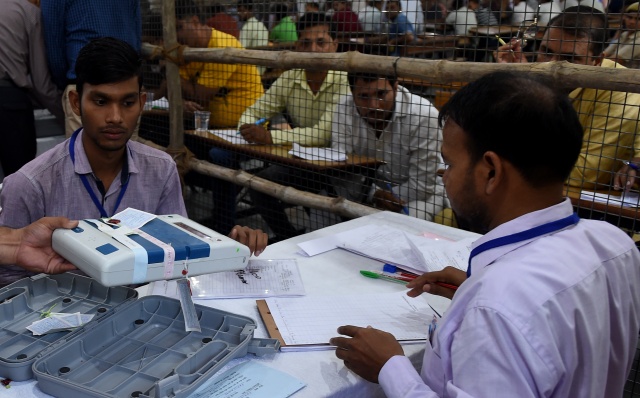 Indian election officials show an open Electronic Voting Machine (EVM) to counting agents at a counting centre in Faridabad in the northern Indian state of haryana on May 23, 2019. (Money SHARMA / AFP)

(AFP) - India began Thursday the mammoth process of counting the roughly 600 million votes cast in the world's biggest election, with results due later in the day.

Exit polls had pointed to a victory for Prime Minister Narendra Modi and his Hindu nationalist government, but the opposition are clinging to hopes of a win.

After an exercise not short of staggering statistics, the votes cast in purportedly the world's most expensive democratic exercise -- costing more than $7 billion, experts say -- were set to be counted in just one day.

If there is a clear trend, this should be evident by around midday (0630 GMT). But if the result is close India's 1.3 billion people may have to wait a lot longer to know the outcome.

In 2014 Modi and his right-wing Bharatiya Janata Party (BJP) swept to power with 282 seats in the 545-seat parliament, the first time a single party had won a majority in 30 years.

It then cobbled together an alliance with 334 seats, and exit polls suggested the coalition this time will win anywhere between 282 and 313, enough to remain in power even at the lower end.

However Rahul Gandhi of the Congress party, hoping to become the fourth member of the Gandhi-Nehru dynasty to lead India, on Wednesday dismissed the projections.

"Don't get disappointed by the propaganda of fake exit polls," Gandhi, 48, told the party faithful on Twitter.

Indian exit polls are notoriously unreliable. In 2004 they pointed to a BJP victory but the results told a different story, bringing a Congress-led government to power.

Results in several regions such as Uttar Pradesh, India's most populous state which formed the core of Modi's support in 2014, and West Bengal in the east, will be key.

The vast size of India stretching from the Himalayas to the Tropics, taking in polluted megacities, deserts and jungles, meant the election stretched over six weeks.

The campaign was awash with insults -- Modi was likened to Hitler and a "gutter insect" -- as well as fake news disseminated on social media in Facebook and WhatsApp's biggest markets.

Gandhi, 48, tried several lines of attack against Modi, in particular over alleged corruption in a French defence deal and over the desperate plight of farmers and the lacklustre economy.

Unemployment is reported to be at a four-decade high with Asia's third-biggest economy growing too slowly to create jobs for the million Indians entering the labour market every month.

Modi's shock cash ban in 2016 -- not even his cabinet were informed before his televised address to the nation -- disrupted livelihoods.

Foreign investment has however increased.

Modi is also seen as divisive. Lynchings of Muslims and low-caste Dalits for eating beef, slaughtering and trading in cattle have risen, leaving some of the country's 170 million Muslims anxious for their future.

Vinod Bansal, a spokesman for the Hindu nationalist Vishwa Hindu Parishad (VHP), told AFP he wants a "complete ban" on the slaughter of cows, sacred to most Hindus.

But Modi, 68, managed deftly to turn the election into a referendum on his rule while depicting himself, often in the third person, as the only one able to defend India.

In this he was given a major boost when a suicide bombing, claimed by a Pakistan-based militant group, killed 40 Indian paratroopers in Indian-administered Kashmir on February 14.

Doubts abound about the efficacy of India's subsequent air strikes on Pakistan, but the action enabled Modi to style himself the "chowkidar" ("watchman") with the 56-inch chest.

"Wherever the terror groups and perpetrators may hide, our security forces will flush them out and punish them," he thundered. "Every drop of blood of our slain soldiers shall be avenged."

General » Be a reporter: Write and send your article » Subscribe for news alert
Tags: India, Vote