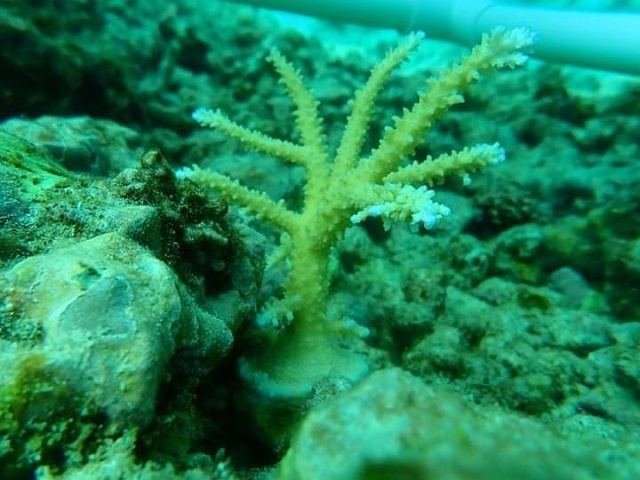 In the on-land nursery, corals are grown in tanks as a backup stock for the sea nursery. (Marine Conservation Society Seychelles)

(Seychelles News Agency) - The first on-land coral nursery project launched in Seychelles last year by a community-based conservation group has been a success so far, with 80 individual corals having been grown and transplanted.

However the Anse Forbans Community Conservation Programme – based in the southern district of Takamaka-- says that the continual rise in sea temperature and human activities remain a major threat to coral restoration work.

The chairperson of the group, Lisa Booyse, said that the group has made great achievements in not only growing coral and transplanting the plants but also in the field of education.

“We have welcomed the Takamaka School as well as the International School of Seychelles to talks and workshops on coral and our amazing marine eco-system,” said Booyse, adding that: “We have our community more aware of corals, their importance to our sustainability. We have children that have never snorkelled before and seen coral now are able to see them growing in tanks.”

The project was launched not only to educate the community but also as a backup plan in case of a major seawater warming effect in Seychelles. The project is an initiative of the not-for-profit group, in partnership with the Marine Conservation Society Seychelles, DoubleTree Resort and Spa, and the Mauritius Commercial Bank.

Seychelles, an archipelago of 115 islands in the western Indian Ocean, is more vulnerable to climate change than other regions as it is closer to the equator, making the water warmer than neighbouring islands of Mauritius and Reunion, an overseas French department.

The project has two sections: a sea nursery which includes the planting of coral in the sea and a coral on-land nursery. In the on-land nursery, corals are grown in tanks as a backup stock for the sea nursery.

Booyse said: “Further to our success we have also made an impact on tourists who visit the nursery and enjoy the talks.  All this allows us to spread the work we do and encourage others to do the same."

Booyse said the group looks for safe areas in which to transplant the corals, away from areas that people walk. "Unfortunately, that was not always successful, so now we are having to transplant over the waves breaks,” said Booyse.

According to Booyse, Anse Forbans no longer has a large stock of corals so very few fragments can be taken for growth from the reef to the nursery. “We have to obtain coral fragments from other reefs and grow the fragments in our tanks and eventually transplant them back to the ocean,” said Booyse.

The project was funded by Mauritius Commercial Bank at a cost of $14,467 in protecting the reef area for generations to enjoy.

The general manager of DoubleTree Resort and Spa – one of the partners of the project - Doreen D' Souza, said the project has been very beneficial for the hotel.

“With regards to the on-land nursery, guests have enjoyed it as they get the chance to interact with experts and know how corals are grown. Some of them did not know that corals could be grown and be transplanted to the sea,” said D' Souza.

Seychellois look to the sea for sustenance with an Exclusive Economic Zone of 1.4 million square kilometres. Fishing is the second top contributor to the island nation’s economy.

“We depend heavily on tourism and this is an essential part of what a tourist wants to see when visiting our islands. We all need to play a part in ensuring, we look after the coral we have and encourage projects such as the Anse Forbans Community Conservation Programme,” said Booyse.

Booyse added that it is important to encourage others to form such groups to look after their environmental needs within their own communities. “Do not wait for others to do something – do it yourself. Clean the beach, encourage your children to do the same!”