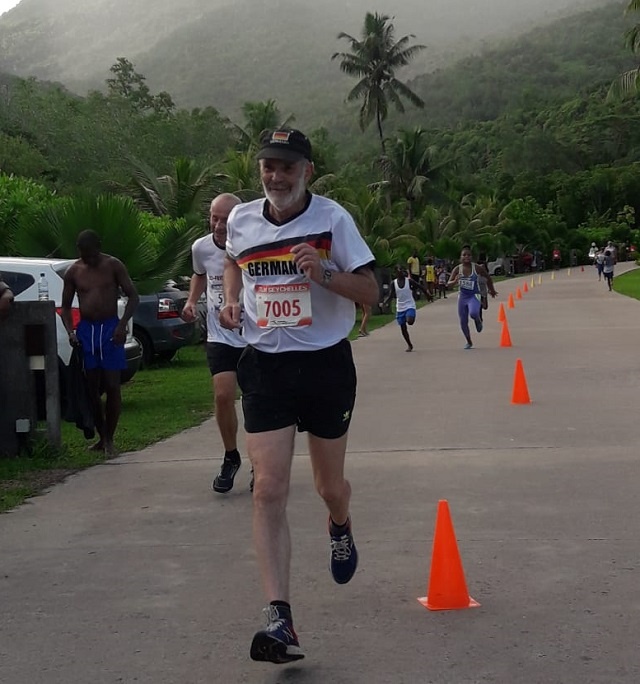 (Seychelles News Agency) - German marathon runner Hanno Rheineck has added a new country to his list, making it 124 after competing in the Seychelles Ephelia eco-healing race on Saturday.

The 76-year-old took part in the 5 kilometre-Master's 2 race sponsored by the Ephelia Resort and Spa, a five-star hotel located on the western part of the main island Mahe. Rheineck finished the race in 77th place overall.

Rheineck, who is a retired teacher, told SNA he started running when he was 16 and his aim was to run a race on each continent. The German said that following his wonderful experience, he decided to challenge himself and to run a race in all countries.

“One country came after another and it became like a sport. It may sound crazy but it’s fun. I have visited so many places and met many interesting people. So it is a combination of sports and holiday, racing and sightseeing,” he said.

Rheineck added that he scouts the races on the internet and from there plans his trip. It took him half a year to plan the trip to Seychelles, a group of 115 islands in the western Indian Ocean. Prior to having the internet, the runner said it was more difficult as he had to write to different federations around the world to get a list of races.

The German said he looks at all his races as a competition and tries to do his best in each one of them. For the Ephelia Eco-Friendly race, he arrived four days prior to the competition to acclimatise himself.

“I always do my best and I never, ever give up a race. I always make it to the finish line and try not to be the last one.”

For Saturday’s race in Port-Glaud district up to Beoliere and Grand Anse Mahe in the western part of Mahe, Rheineck clocked 40 minutes 28 seconds.

He described it as one of his toughest races so far.

“It was so hot and the steep terrain in some areas made it very difficult. I would say this was one of the most difficult races I’ve done,” he said.

The athlete said it is difficult to say which country has been the best experience so far.

“It depends on the people, the weather, and how the race is organised. The experience is different for each country. I ran over the Chinese Great wall, in North Korea, through the desert in Namibia, in Oman. I ran in Costa Rica, from the Pacific Ocean to the Atlantic Ocean. I’ve done so many interesting races.”

The German who comes from a town near Cologne and Bonn, said that the greatest satisfaction is to run alongside younger people who say they are inspired by his perseverance and tenacity.

“I will be 77 in November and the doctor says I am as fit as a 40-year-old. I don’t have any health conditions and running alongside younger runners makes me feel so good and younger,” he added.

Rheineck’s advice is that it is never too late to start running.

It is the second time that the Ephelia Resort and Spa organises the Ephelia eco-friendly marathon. 224 participants took part in the three categories – 1km, 5km and 10km.

One of the organisers, Cedric Thomas, told SNA that it was an honour to have the marathon ambassador in Seychelles to compete in their event.

Prior to coming to Seychelles, the German ran a 7.5-kilometre race in Bangladesh. From Seychelles his next destinations are the Comoros and Rwanda.

Sport » Be a reporter: Write and send your article » Subscribe for news alert
Tags: Ephelia Resort and Spa, Eco-Friendly Marathon