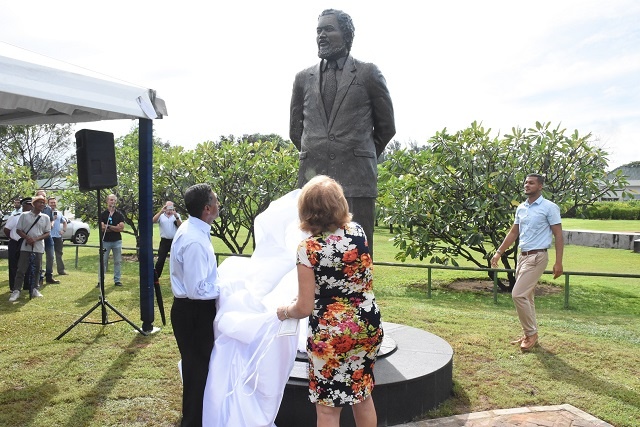 The unveiling of the statue was done by President Danny Faure and Mancham’s wife, Catherine, at the Peace Park, Victoria. (Joena Meme)

(Seychelles News Agency) - A three-metre bronze statue of Seychelles’ late president James Mancham was unveiled on Thursday, and a family member said it was a fitting tribute to an inspiring leader.

“Irrespective of one's political persuasion, this statue is symbolic and is reflective of the formidable contribution Sir James Mancham played in promoting peace worldwide as well as championing the plight of Seychelles wherever he ventured,” said his son, Alexander Mancham.

Alexander Mancham added that the former president “was someone who deplored violence, hostility and aggression.”

The unveiling of the statue was done by President Danny Faure and Mancham’s wife, Catherine, at the Peace Park, Victoria, in the presence of other family members and high officials.

Costing over $110,000, the statue was crafted by Jean Doyle, one of South Africa's leading sculptors, together with her son Anton Doyle. It took around six months to complete, a process that was facilitated by Eden Island.

"I think it is wonderful and they did a great job. I have been looking forward to the unveiling because my son was sent to South Africa to check it off to see whether it is realistic and so we have been building to today," said Catherine Mancham, the former president's wife.

During his career and retirement, the founding president of Seychelles received many awards and made international headlines.

The chief executive of Eden Island, Craig Heeger, said that “the project started four years ago when I had decided, through Eden Island, to offer the island a statue of President Mandela.”

“Eventually the Department of Arts and Culture agreed that the statue would be placed at the Peace Park. Then Sir James Mancham died and the Cabinet of Ministers decided that it would be inappropriate for a South African to be celebrated here before a Seychellois,” said Heeger.

The statue of Mandela is expected to be unveiled on June 18 this year in the same location, to be followed by that of the late former president, France Albert Rene in November.

General » Be a reporter: Write and send your article » Subscribe for news alert
Tags: Foundation for Democracy in Africa, International Conference of Jurists, Peace Park