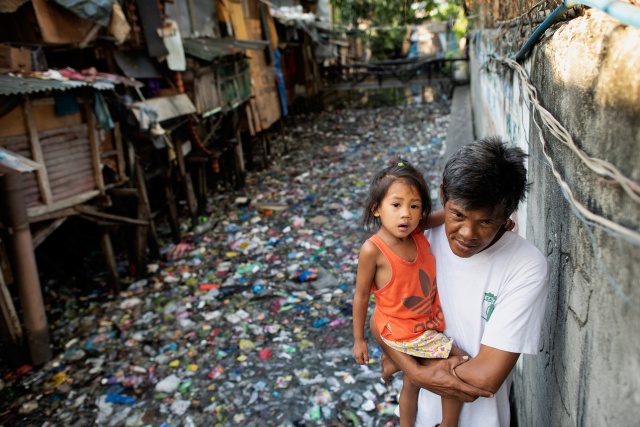 A man carries a girl along a canal polluted with plastic and garbage at the Estero de San Lazaro in Manila on March 22, 2019. Tonnes of garbage sent to the Philippines years ago was shipped back to Canada on Friday after a festering diplomatic row, as Asian nations increasingly reject serving as dumping grounds for international trash.
(Noel CELIS / AFP)

(AFP) - Tonnes of garbage sent to the Philippines years ago was shipped back to Canada on Friday after a festering diplomatic row, as Asian nations increasingly reject serving as dumping grounds for international trash.

After a long campaign to urge Canada to take back the rotting waste, Philippine President Rodrigo Duterte lashed out at Ottawa last week and ordered the refuse returned immediately.

The 69 shipping containers of garbage were loaded onto a cargo vessel at Subic Bay, a former US naval base and shipping port northwest of Manila, and began the lengthy trip to Canada.

"Baaaaaaaaa bye, as we say it," Philippine Foreign Secretary Teodoro Locsin wrote on Twitter, along with images of the vessel leaving.

Canada's Environment Minister Catherine McKenna welcomed the news of the trash being returned, telling reporters on Thursday: "We committed with the Philippines and we're working closely with them."

Just days earlier Malaysia announced it was shipping 450 tonnes of imported plastic waste back to its sources, including Australia, Bangladesh, Canada, China, Japan, Saudi Arabia and the United States.

For years China had received the bulk of scrap plastic from around the world, but closed its doors to foreign refuse last year in an effort to clean up its environment.

Huge quantities of waste plastic have since been redirected to Southeast Asia, including Malaysia, Indonesia and to a lesser degree the Philippines.

"We've seen pristine communities... transformed into dumpsites because of a tsunami of waste shipments from the US, UK and Australia as a result of the China ban," said Von Hernandez, global coordinator from Break Free From Plastic advocacy group.

The Philippine row centres on dozens of containers which a Canadian firm sent to the Southeast Asian nation in 2013 and 2014 -- incorrectly labelled as recyclables.

The issue has polluted Manila-Ottawa ties for years, but it blew up when Duterte said in an April speech: "Let's fight Canada. I will declare war against them."

Since then Canada pledged to take back the waste, but after it missed a Manila-imposed May 15 deadline the Philippines recalled its envoys to Ottawa.

Duterte's spokesman, Salvador Panelo, ratcheted up the pressure by saying Manila would ship the trash back on its own "immediately" and threatened to dump the waste in Canadian waters.

From the Philippine side there were immediate signs the departure of the trash would stabilise Manila-Ottawa relations.

"To our recalled posts, get your flights back. Thanks and sorry for the trouble you went through to drive home a point." Foreign Secretary Locsin tweeted on Friday.

Global concern over plastic pollution has been spurred by shocking images of waste-clogged rivers in Southeast Asia and accounts of dead sea creatures found with kilos of refuse in their stomachs.

Around 300 million tonnes of plastic are produced every year, according to the Worldwide Fund for Nature (WWF), with much of it ending up in landfills or polluting the seas, in what has become a growing international crisis.