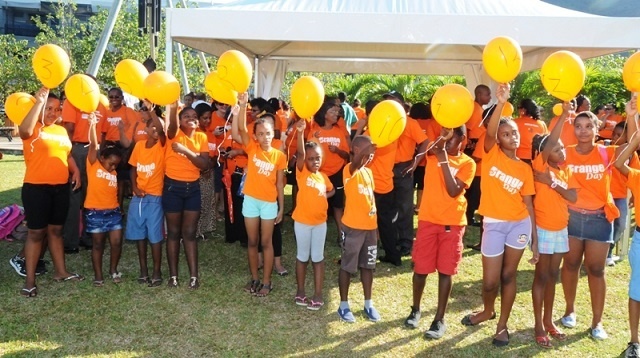 The Orange Day campaign in 2014 in Seychelles which was 16 Days of Activism Against gender-based violence. (Seychelles Nation)

The Ministry of Family Affairs has launched the Orange Campaign in all primary schools in Seychelles, the latest effort to raise awareness about gender-based violence (GBV) in the hopes of eliminating it from the island nation.

“We have seen and witnessed school fights and arguments that sometimes break out among students,” said the principal secretary for Family Affairs, Marie-Josée Bonne, who added: “We are also seeing instances of bullying which is a sad problem present in many of our schools and from what we gather, in many cases, children witness violence at home.”

Bonne added that “in recent years, Seychelles has seen an unprecedented rise in levels of violence not only against women and girls but among youths in general.”

According to Bonne if violence and GBV are to end, there is an urgent need to bring about a change of minds, hearts and behaviour of children.

“We firmly believe that a change in mindset and attitude is necessary and fast. We need to put an end to violence and for this to happen, everyone needs to work together, and we are counting on your participation to develop our children to promote peace,” the principal secretary

The principal secretary in the Ministry of Education and Human Resource Development, Odile Decomarmond, said the ministry has welcomed the campaign.

"As this will create awareness among our young students on the effects of violence against women and children. This campaign will create an opportunity for students to learn more about human rights so as to understand when these rights are violated. The promotion of Orange Day will also help to emphasize on prevention of violence of any sort," explained Decomarmond.

Schools will be encouraged to organise activities promoting peace and to raise awareness around violence in general especially on the date dedicated as the Orange Day.

The 25th of each month has been designated as Orange Day by the United Nations (UN) when people are encouraged to wear orange in solidarity with survivors of violence and to unite to take a stand towards ending gender-based violence (GBV).

Since November 2012, Seychelles has joined the rest of the world to commemorate Orange Day and to mobilise civil society, activists, government as well as the public in general to amplify the impact of the UN initiated campaign.

Last year the Orange Day campaign was launched in all public secondary schools in Seychelles – 115 islands in the western Indian Ocean. In January 2019, the campaign was also launched in the prison.

Renelle Anacoura, a primary school teacher for the last 40 years, has welcomed the campaign and said there is a need to “sensitise children on violence at a very early age, as we know that children can be experiencing violence outside school and if we can empower them early, they can report this and get help.”

This opinion is also shared by another teacher, Julie Josias. “Our creche is located in a hotspot in the middle of three districts – Les Mamelles, Roche Caiman, Plaisance. We have had cases of kids being violent and where parents had to be called in,” explained Josias.

The teacher added that awareness is key as “we do not want to end up with a society where our kids who have experienced violence grows up to be perpetrators.”