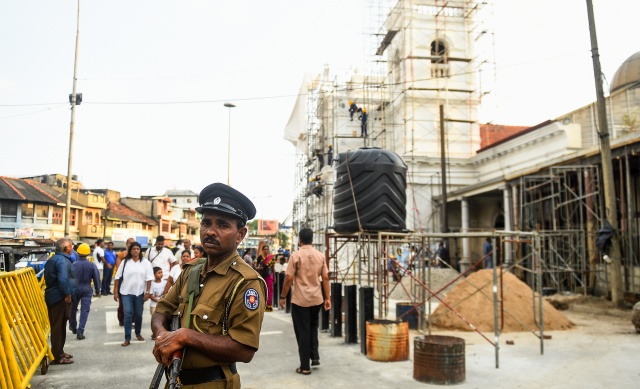 A Sri Lankan policeman stands guard as Catholic devotees take part in a remembrance ceremony in front of St. Anthony's Church in Colombo on May 21, 2019, a month after a series of deadly Easter Sunday blasts targeting churches and luxury hotels. Hundreds of Catholics prayed outside the bombed St Anthony's Church in Colombo on May 21, marking one month since the Easter Sunday suicide attacks that killed 258 people in Sri Lanka. (ISHARA S. KODIKARA / AFP)

In a 20-page complaint, Inspector-General Pujith Jayasundara disclosed serious communication gaps between intelligence agencies and security arms of the government, all which fall under Sirisena.

The SIS, which reports directly to Sirisena, wanted the police Terrorist Investigation Department to stop all inquiries into extremist Muslim factions, including the National Thowheeth Jama'ath (NTJ), which was blamed for the Easter Sunday bombings.

Jayasundara said the head of the SIS, Nilantha Jayawardena, did not take seriously the intelligence shared by neighbouring India which warned of an impending attack by the NTJ.

Jayasundara said despite the SIS not sharing information warnings with the police department, he had initiated action to alert his senior men, but he had no input from the main spy agency.

Sirisena suspended Jayasundara after he refused to accept responsibility for the deadly attacks. The Attorney General has asked for a full bench of the apex court to decide the case.

Jayasundara said he was offered a diplomatic post if he took the fall and stepped down, but he refused as he said he was not responsible for the catastrophic intelligence failure.

He said he had been sidelined by the president since a political rift between the President and Prime Minister Ranil Wickremesinghe emerged in October.

Jayasundara's petition came days after Sirisena publicly rebuked another intelligence official, Sisira Mendis, after he told a parliamentary panel that the Easter suicide bombings could have been avoided.

Mendis's testimony appeared to put Sirisena in a poor light by implying he had not held National Security Council meetings to review threats such as the attacks carried out by Islamic State.

In a statement, Sirisena denied claims by Mendis that the country's highest security body had not met as often as it should have around the time of the attacks, which were blamed on Islamic State-backed militants.

Sirisena, who is also defence minister, said in a statement he held NSC meetings twice a week, contradicting Mendis who told parliament the last meeting was on February 19, more than two months before the April 21 bombings targeting three churches and three luxury hotels.

Sirisena said he met with the national police chief and his top brass 13 days before the Easter Sunday attacks and no officer raised warnings which had been relayed by India.

Sri Lanka has been under a state of emergency since the attacks, but Sirisena announced last week that it will end in a month.