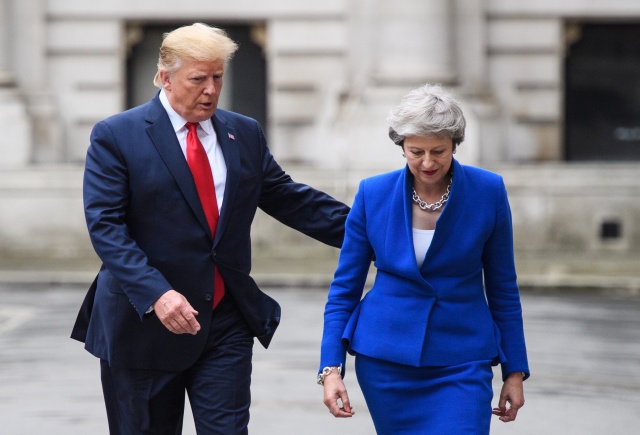 Britain's Prime Minister Theresa May (R) and US President Donald Trump (L) walk through the Quadrangle of the Foreign and Commonwealth Office (FCO) for a joint press conference in central London on June 4, 2019 on the second day of the US president's State Visit. President Donald Trump touted a "very, very substantial trade deal" between the United States and Britain after Brexit as he met Prime Minister Theresa May on Tuesday for fraught talks held amid street protests. (MANDEL NGAN / AFP)

(AFP) - US President Donald Trump promised a "phenomenal" post-Brexit trade deal with Britain as he met outgoing Prime Minister Theresa May on Tuesday to boost their frayed alliance against a backdrop of protests and political turmoil.

As a big balloon of a nappy-wearing baby Trump floated over a rally that blocked central London traffic, the US leader heaped praise on May and scorn on opposition Labour chief Jeremy Corbyn.

He dismissed thousands of protesters rallying nearby as "fake news" and turned down a meeting with Corbyn -- who delivered a fiery speech against Trump's policies despite also requesting one-on-one talks -- branding him a "somewhat negative force".

His three-day visit began on Monday with a handshake with Queen Elizabeth II on the lawn of Buckingham Palace and a white-tie banquet featuring nearly 200 royal and Trump family guests.

But behind the pageantry Britain is in upheaval and its government all-but rudderless four months before it is due to end its four-decade membership in the European Union.

His meeting with May comes just weeks before she is set to quit after failing to finish Brexit despite focusing on little else for the past three years.

Trump and May looked stony-faced walking up to their joint press appearance and did not shake hands before going into formal talks at the prime minister's Downing Street office.

Nearby, noisy activists took to the streets to protest everything from Trump's dismissive views on climate change to his embrace of anti-abortion groups.

"Everything Trump stands for -- misogyny, climate denying -- everything about him is wrong," marble restorer Steve Gray told AFP at the main rally.

The US president's visit is technically centred around Wednesday's D-Day 75th anniversary commemorations.

But it comes at an especially chaotic time for the UK, with May formally stepping down as leader of her Conservatives on Friday.

She will stay on as prime minister until her successor is chosen out of 11 contenders from her party.

Whoever takes over will have to make some tough choices before the twice-delayed Brexit deadline on October 31.

Trump preceded his visit by urging Britain to walk away from the EU without an agreement.

He also suggested that Brexit-backing former foreign minister Boris Johnson would be an "excellent" leader to get it done.

The two spoke by phone for 20 minutes on Tuesday, according to a source close to Johnson.

Even surging anti-EU Brexit Party leader Nigel Farage said he had a "good meeting" with Trump at the US ambassador's residence, focused on getting Britain out of the EU.

Downing Street said Trump had been "courteous" enough to warn May he would be reaching out to her rivals, calling it "inevitable".

With the US increasingly isolated from its traditional allies, Trump talked up the "special relationship" with Britain during a joint press conference with May.

Trump said he was certain the sides could reach an understanding on Chinese telecoms giant Huawei that could avoid disruption in intelligence-sharing between London and Washington.

"I see absolutely no limitation," said Trump, who has effectively banned the Chinese firm at home over fears it could be used to spy for Beijing.

But US-UK relations are also being tested by different approaches to Iran and climate change, besides Trump's personal politics and antics.

"I've always talked openly with you, Donald, when we have taken a different approach," May said.

Trump himself touched on the difficulties likely to face May's successor, stressing that "everything is on the table" in future trade talks.

"As the UK makes preparations to exit the European Union, the United States is committed to a phenomenal trade deal between the US and the UK."

Britain is particularly concerned that its beloved state-run health service could be opened up to US companies.

Their talks were accompanied by noisy protests from thousands of anti-Trump activists.

One group paraded a life-size doll of Trump -- wearing his trademark red "Make America Great Again" cap -- sitting on a toilet with his pants down and a phone in his hands.

"It's hard to even know where to start with Trump," said Norwegian college student Helen Thuen.

"It's about the policies, that's what really matters. His personality affects his policies, though."

Trump's day will be rounded off with a lavish dinner at the US ambassador's residence attended by the heir to the British throne Prince Charles and his wife Camilla.

General » Be a reporter: Write and send your article » Subscribe for news alert
Tags: Britain, US, diplomacy