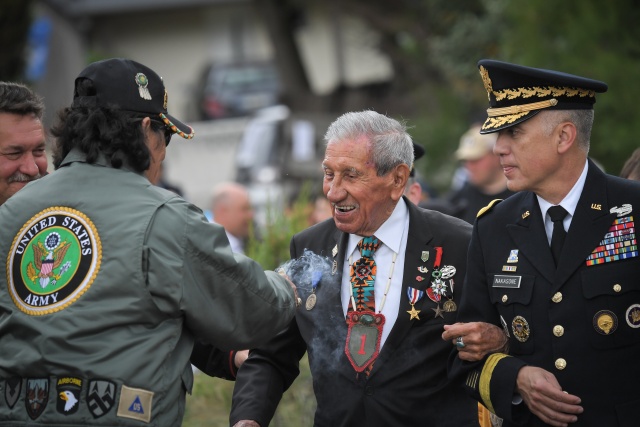 WWII US native American Indian veteran Charles Shay (C) and US four star General and Director of the National Security Agency (NSA) Paul Nakasone are blessed by 'holy smoke' as they arrive to take part in a ceremony on Omaha Beach in Saint-Laurent-sur-Mer, western France on June 5, 2019, in homage to native American Indians who took part in the DDay landings of World War II. (LOIC VENANCE / AFP)

(AFP) - World leaders including President Donald Trump and his French counterpart Emmanuel Macron will attend ceremonies Thursday on the beaches of Normandy, where 75 years ago Allied troops landed to push Nazi forces out of France.

At a time of increasing international discord, the leaders will seek to show that transatlantic harmony remains intact as they meet for a second day to salute the heroism of the soldiers who surged onto the Normandy sands on June 6, 1944.

On an occasion that will mix high politics with poignant historical remembrance, Macron will first meet British Prime Minister Theresa May to launch the construction of a British memorial at Ver-sur-Mer.

Macron and Trump will then hold private talks followed by a working lunch after a ceremony at the US military cemetery at Colleville-sur-Mer.

The site overlooking Omaha Beach holds 9,400 graves -- just 40 percent of the American forces killed during the weeks of fighting that followed the D-Day landings.

Both leaders will give speeches, while the French president will also bestow the Legion d'Honneur, France's highest honour, on five American veterans.

D-Day is seen by many as one of the great symbols of transatlantic cooperation, as young American servicemen sacrificed their lives in the struggle to end the Third Reich's grip on Europe.

Tens of thousands of French and foreign visitors have converged on the Normandy coast for this year's commemorations to honour the dwindling number of firsthand witnesses to the fighting.

But the Atlantic alliance has been tested by Trump's prickly relations with Europe, as the two sides feud on issues ranging from Iran and Russia to global trade and climate change.

Canadian Prime Minister Justin Trudeau will attend a ceremony at Juno Beach, where Canadian forces were in charge of the assault.

Trump arrives in France from a three-day state visit to Britain, where he attended a ceremony in Portsmouth to mark D-Day alongside Queen Elizabeth II and over a dozen other world leaders.

In a joint proclamation, the 16 nations present at Portsmouth affirmed their shared responsibility to ensure that the horrors of World War II are never repeated.

They reaffirmed their commitment to "shared values" and vowed to work together to defend freedoms "whenever they are threatened".

German Chancellor Angela Merkel, who attended the Portsmouth ceremony, will not be present in Normandy.

President Vladimir Putin, who was invited in 2004 on the 60th anniversary of the invasion, did not receive an invitation to either ceremony, a snub indicative of the West's strained relations with Russia.

Russia's foreign ministry said Wednesday that the Allied invasion on D-Day did not determine the course of World War II and its importance should not be exaggerated.

Spokeswoman Maria Zakharova told journalists that it was the efforts of the Soviet Union, which entered the war in 1941, that secured victory.

On June 6, 1944, now known as the "longest day", 156,000 troops landed on the beaches chosen for the D-Day invasion, most of them American, British and Canadian.

It remains the largest amphibious assault in history, claiming the lives of an estimated 4,400 troops in the first day alone.

"They're really the greatest generation," he said.

But at the ceremony in Portsmouth, the British Queen said her wartime generation had proved "resilient", noting that some had thought the 60th-anniversary ceremony might be their last.

General » Be a reporter: Write and send your article » Subscribe for news alert
Tags: France, US, Britain, history, diplomacy, WWII