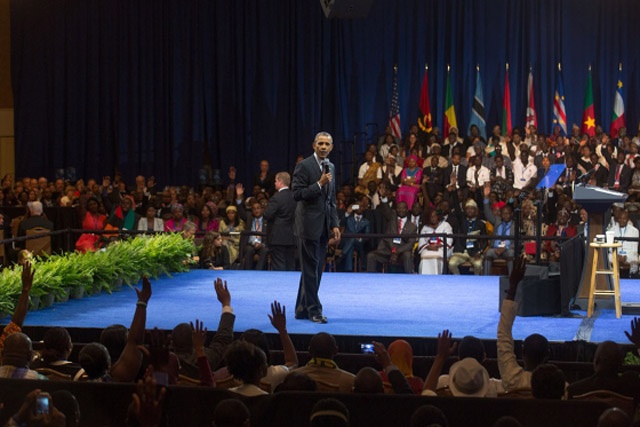 (Seychelles News Agency) - Over 40 African heads of state and heads of government started arriving in the United States on Monday for the first US - Africa summit hosted by President Barrack Obama, which on the final day today is seeing discussions focus on investment, peace and regional stability as well as governance issues.

The arrival of the African leaders in the US has come almost a week after hundreds of young people started making their way back to their African home countries after having also had to chance to engage with the US President.

Some 500 young people between the ages of 25 and 35 from the African continent, including three Seychellois, were selected to study for six weeks at top American universities, as part of the Young African Leaders Initiative (YALI).

The 500 young leaders chosen for this first learning experience could choose between three areas of coursework and leadership training: namely, business and entrepreneurship, civic leadership, and public management.

The young leaders of Seychelles

The three Seychellois who travelled to the US in June to take part in the programme are Sheryl Vengadasamy, elected member of the Seychelles National Assembly for the ruling party 'Parti Lepep', Fatoumata Sylla, the director general for Youth Affairs in the President’s Office – both of whom were selected under the Public Management category – and a young pilot Christopher Lespoir, who forms part of the Young Innovators category.

When the names of the Fellows were released in April this year by the US ambassador to Seychelles, Shari Villarosa, four Seychellois were named as successful candidates. Unfortunately however, Micheline Khan, who was selected in the Business Entrepreneurship category, had to withdraw from the fellowship due to unforeseen circumstances.

All in all, 70 Seychellois applied for this year’s fellowship, forming part of a massive group of 50,000 applicants from the continent.

The ‘experience of a lifetime’

While in the US the three Fellows shared some of their thoughts about the programme with the daily local newspaper Seychelles Nation, with Fatoumata Sylla describing it as the experience of a lifetime.

“I consider it an additional chance to be at Howard University, a historically black college and university (HBCU) situated in Washington and as Fellows we had the opportunity to visit a number of important institutions such as the US Capitol Hill, Department of State, World Bank Headquarters, meet congress people, take part in important discussions with influential people and give back to the community through volunteer work,” she said.

Sheryl Vengadasamy, who was placed in Minnesota, the state of a thousand lakes, praised the coursework and other activities where she learned about different leadership models, saying the programme’s emphasis was on experiential learning.

As for Christopher Lespoir, who was placed in an entrepreneurship programme at the University of Texas in Austin said the programme was packed with useful and informative information about marketing, leadership and networking.

“We had a number of educational visits to various museums such as George Washington Carver Museum, Bob Bullock Texas State History Museum and the Blanton Museum. We equally had the chance to visit various firms, from Google to LiveStrong foundation,” he said, adding that he had also had the opportunity to network and receive advice from many well-established entrepreneurs.

All three Seychellois along with their other colleagues from the African continent were looking forward to what they described as the highlight of the whole experience and that is to meet the American president, where the Fellows would engage with him in dialogue centred on various themes.

During the much-awaited summit with U.S. President Barack Obama on Monday July 28 the young men and women who had converged in Washington, D.C. heard the US President’s commitment to provide significant resources to enhance the leadership and entrepreneurship skills of African youths.

According to the 2012 African Economic Outlook report prepared by experts from several international institutions Africa has the youngest people in the world with 200 million people aged between 15 and 24, with the current trend indicating that the figure will double by 2045.

Obama also took the opportunity while the handful of representatives of the wider African youth population gathered in Washington DC to announce that he would expand his Washington fellowship to include 1,000 young leaders on the programme each year by 2016.

“Beginning in 2015, these Centers will improve the availability and quality of leadership training programs and professional development opportunities for young African leaders.  Each will be run as a public-private partnership, capitalizing on the energy and dynamism of the private sector, the knowledge of African and American institutions and the programmatic and educational resources of the U.S. Government.  The Centers will focus on engaging young leaders from a wide range of organizations and backgrounds and with a diversity of experiences,” read a press statement published by the White House.

YALI – experience of a lifetime

Already back to the Indian Ocean archipelago, Sylla describes Obama’s decision to change the name of his fellowship programme as very significant as she says it underlined two leaders whose name will forever be remembered in history - Nelson Mandela and George Washington.

“By adding the name of Mandela to the programme, President Obama pays a big homage to one of the biggest leaders of Africa and the world. Mandela proved time and time again that he firmly believes in the potential of the youth. "It always seems to be impossible until it is done" - this quote by Mandela has been repeated time and time again during the Presidential Summit. This strong quote by Mandela underlines the sense of ambition, dedication, perseverance and resilience any leader needs to have in order to advance,” said Sylla in an email interview with SNA describing the YALI experience as an embodiment of all of the above.

The 500 African youths who arrived in the US in June, had the chance to visit 20 top American universities.

Sylla told SNA that class interactions during the six weeks always centred on the concept of servant leadership while site visits allowed the participants to put what they learned into context.

“Interactions with different people allowed us to have different perspective on the implementation of the US Government's policies,” said Sylla.

For Sylla and surely the others fellows, the culmination of the experience was meeting President Obama and the First Lady.

“They both delivered two strong, powerful, moving and passionate speeches about the importance of youth in building a nation and believing in one's ability to effect positive change for our community, country and African continent. The interventions of other powerful US figures such as Secretary John Kerry and Ambassadors Susan Rice and Powell reinforced the belief in youth vitality to make change,” she said.

“It was truly an honour to be able to exchange with 500 young Africans, all optimistic about the future of Africa and ready to help her continue to soar.”

The majority of the fellows like Sylla are now back home and back to their usual way of life having surely gained valuable experiences which they can apply to their work and share with colleagues.

But for a hundred of them including one of the Seychelles' participants Sheryl Vengadasamy, the learning experience goes on as they have stayed in the US for a further eight weeks to intern at non-governmental organizations (NGOs), private companies, and governmental offices.

Vengadasamy who was on the public management programme says her group comprised of 25 young African leaders from 18 different countries.

“I have not only been able to share about Seychelles but through them I have learnt about Africa, we have formed a bond of friendship and established a network where we can share ideas and support each other,” Vengadasamy told SNA in an email interview from the US today.

The young parliamentarian says for her, the climax of the six week programme was the presidential summit led by President Obama where she was chosen to form part of a panel that represented the 500 fellows at the congressional forum on investing in the next generation in Africa.

Being part of the 100 fellows getting to stay for an additional internship of eight weeks in the US Vengadasamy has also participated in several activities and meetings organised as part of the ongoing three day US – Africa summit, and met with members of the Seychelles delegation.

“I have had the chance to participate in another congressional forum on growth in Africa,” she noted.

“For me the programme has provided an opportunity not only to learn but also to share ideas on how we can inspire and educate others on what Africa has to offer, showing that Africa is not only marred by conflicts, poverty and famine which is often portrayed in the media, but to highlight all the positive things that are happening.”