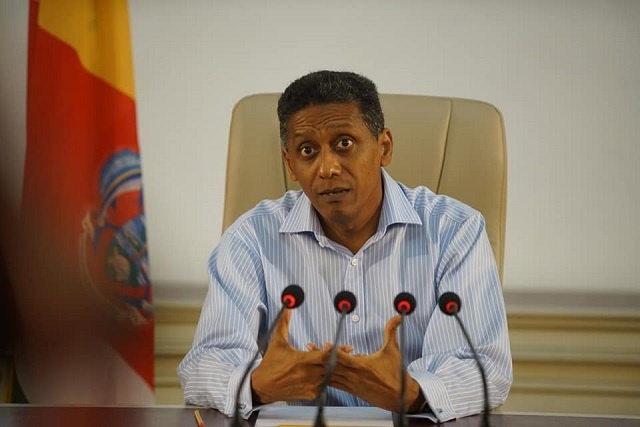 (Seychelles News Agency) - The President of Seychelles, Danny Faure, gave his second live press conference of the year at State House on Thursday. SNA presents an overview of the issues raised.

Faure’s response was that he had never said that he is not a member of the party.

In May 2017, Faure had said that as the President of Seychelles, he will not be at the head of the Parti Lepep -- the former name of United Seychelles party.

Faure added that: “I have chosen to inform the people on my stance to vie for president in the next coming election. I am waiting for the party’s congress to decide on my candidacy. I am confident. It is the people of Seychelles who are going to judge my performance and decide who is better to run the country.”

Salary increase and economic performance of the country

Earlier this year the government presented a five percent salary increase for public service employees before the Seychelles National Assembly to a point that the matter reached a stalemate and has been referred to the court.

Faure said that the money was budgeted already and had the opposition coalition -- Linyon Demokratik Seselwa (LDS) -- understood the rationale behind the decision, the workers who qualified would have already gotten their increment.

“The government has made a commitment and as soon as this matter is resolved the workers will get their increment. I don’t want to say much as the matter is now in the hands of the court,” said Faure.

With regards to the economic performance, Faure said that year on year inflation has remained at two percent.

“We have the Central Bank to regulate things. I can say the country’s budget and expenses are on the right track. The Seychelles’ economy is performing very well. Tourist arrival is on the increase. However Seychelles remains vulnerable to international shocks, but we can manoeuvre,” he said.

Faure said that the National Assembly has the power to initiate legislation and change anything with regards to that.

“If they want to change anything with regards to the way citizenship is being handled, the responsibility is not for the government only, any member of the National Assembly can do so,” said Faure.

A referendum on the voting of non-residents

Faure said he has followed the different views on this subject and has decided to present it as law before the National Assembly.

“It is my wish that it is not me who takes the final decision on this matter neither the members of the National Assembly. The law that will pass will have a popular voice as it will have the direct participation of the public. It does not mean that we don’t have direction on this matter, but we want to approach things in a dynamic way,” said Faure.

On the recent announcement of Air Mauritius flying back to Seychelles, Faure said that this has always been possible given the bilateral agreement between the two countries.

“We can’t tell Air Mauritius not to fly to Seychelles. They had stopped, but now they want to come back as they feel that this is the appropriate time. However our national career airline will keep a close eye on this development,” he said

Commenting on the latest development with regards to the Assumption island, Faure said that what is going around this subject is just rumours.

“All that is being said in terms of a military base being built on the island so far are just rumours. We only have two soldiers on the island. If there is any development on the island we will be the first to tell the people,” said Faure.

On the question on holding a referendum for people to decide on this issues, the President said since there will be no military base there is no need for a referendum.

Appointment on the Truth, Reconciliation and National Unity Commission

Asked why a non-Seychellois has been appointed as the head of the Commission Faure said that he has been taken to court for that matter.

“I don’t want to enter much into this subject, I wanted to let the court decide.  I wanted to say that this is the first committee of this sort. It will be dealing with sensitive issues. We are a small country. We all know each other. It is in my judgment that if we want to do it well, we need to do it that way. But the court will decide,” said Faure.

The presidential visit to Saudi Arabia

His visit was condemned by the local Association of Media practitioners (AMPS) following the death of Saudi Arabian Journalist, Jamal Khashoggi.

Faure said he an official invitation from the king.

“On my visit, we discussed cooperation and relationship with a small country like Seychelles. Saudi Arabia has helped Seychelles in many aspects. They have loaned Seychelles money to build schools. It is a country that has helped many countries. I do not enter into any country’s internal affairs,” he said.