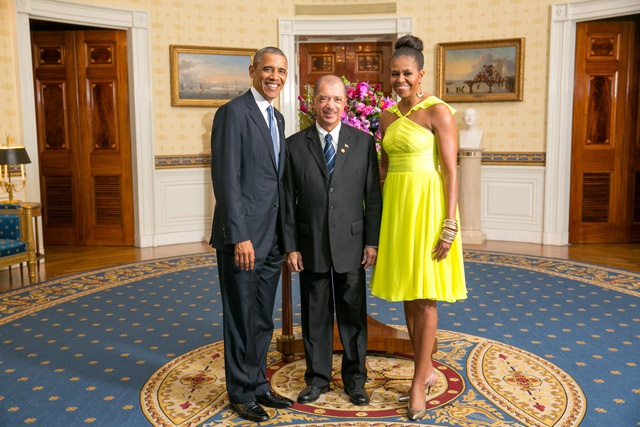 (Seychelles News Agency) - It is today that the US President Barrack Obama will sit down with over 40 African leaders, including Seychelles President James Michel to engage in dialogue that will address issues of shared interest and mutual concern as the first US-Africa summit enters its last day.

Investment, peace and regional stability as well governance issues are on the table.

In a press statement issued this morning, State House says Michel, who arrived in Washington yesterday and was received at the White House in the evening by US President Barrack Obama and the US First Lady Michelle Obama.

This was during the official dinner organized to welcome the African leaders attending the summit.

Michel has described the summit as an opportunity to discuss the development of the Blue Economy in Africa with the support of the US.

In a national statement he issued to the US government for the summit, Michel said that the Blue Economy has been identified as a key opportunity to maximize food security across the African continent, contributing to poverty eradication and mitigating the effects of climate change.

“We are firm advocates of an inclusive view of the Blue Economy that can harness the true potential of Africa. We count on the support of the US in ensuring that Africa’s oceans can bring renewed wealth creation opportunities to our continent,” said Michel the statement.

“It is essential that we work towards sustainable development goals that move beyond extraction of natural resources as the basis of economic growth, and that look at transforming our oceans into spaces for development and shared opportunity.”

US pledges billions to Africa

Currently, China is the main investor in Africa followed by Europe.

With "Investing in the Next Generation" being the theme chosen for the three-day summit, Washington is being seen as trying to seek ways to get US businesses interested in the opportunities in Africa.

A U.S.-Africa business forum held yesterday was a step in that direction, as over 90 US companies joined with the African leaders and business representatives from their respective countries.

According to a statement issued by the White House at the end of yesterday’s forum, Obama announced new financing to strengthen the US’s commercial commitment with Africa as well as pledges worth billions of dollars from US firms willing to invest on the continent.

“President Obama announced $7 billion in new financing to promote U.S. exports to and investments in Africa under the Doing Business In Africa Campaign (DBIA). U.S. companies announced new deals in clean energy, aviation, banking, and construction worth more than $14 billion, in addition to $12 billion in new commitments under the President’s Power Africa initiative from private sector partners, the World Bank, and the government of Sweden. Taken together, these new commitments amount to more than $33 billion,” reads the statement.