Iran warns over 'economic war' waged through US sanctions 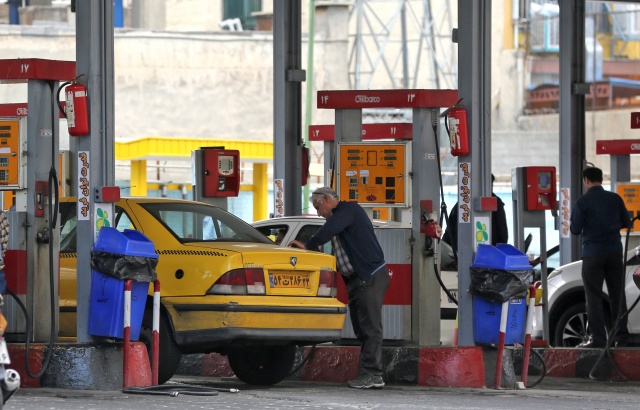 Iranians drivers fill their tanks at a gas station in the Islamic republic's capital Tehran, on April 24, 2019. Iranians, already hard hit by punishing US economic sanctions, are bracing for more pain after Washington abolished waivers for some countries which had allowed them to buy oil from Iran. (ATTA KENARE / AFP)

(AFP) - Iran's foreign minister warned Monday of the consequences of waging "economic war" against the Islamic republic through US sanctions, saying those conducting and supporting it could not expect to "remain safe".

"One cannot expect an economic war to continue against the Iranian people and that those waging this war and those supporting it remain safe," Mohammad Javad Zarif said at a joint news conference in Tehran with his German counterpart Heiko Maas.

"The only way to decrease tensions in the region is to stop the economic war," he added, noting Germany and the European Union could have an "important role" to play in defusing the situation.

Iran signed a landmark nuclear accord with Britain, China, France, Germany, Russia and the United States in 2015, leading to sanctions relief in exchange for curbs on its nuclear programme.

But the US administration of President Donald Trump has imposed sweeping sanctions on Iran and, according to Tehran, waged an "economic war" against it after walking away from the deal.

Germany's visiting foreign minister said his country would do its utmost to ensure tensions do not escalate.

"There is war in Syria and in Yemen, fortunately not here," Maas said. "We want to do everything we can to keep it that way" for Iran.

"Nevertheless, the tensions here in the region are worrying, and we fear that single events can trigger developments that end in violence, and we want to prevent this under all circumstances."

Maas met Zarif in Tehran, and both said they discussed the future of the nuclear pact and regional issues, although their news conference appeared tense and they appeared to agree on little.

"We had a serious, frank and rather long discussion," Zarif said.

Ahead of their meeting, Maas acknowledged the economic benefits Tehran hoped for from the deal were now "more difficult to obtain" but urged Iran to fully respect the it.

Iran's President Hassan Rouhani also met Maas and called on the Europeans to "undertake concrete and serious actions" to "safeguard" the agreement, according to a statement from his office.

Even as Trump says he is open to talks, his administration ramped up pressure further last week by targeting Iran's petrochemical industry.

"Making threats using nuclear blackmail and terrorizing other nations is typical behavior for the revolutionary regime in Tehran," she told reporters in Washington.

"Iran faces a simple choice. It can either behave like a normal country or watch its economy crumble," she said.

Maas said the nuclear deal was "extraordinarily important" for Europe's security but acknowledged limited options to support it.

"We will not work miracles. But we are doing all we can to prevent a failure," Maas said.

"The summary of Maas' remarks: we are nothing without America and are not capable of doing anything, do not expect much from us," Abdollah Ganji, the managing director of ultra-conservative Javan daily, wrote mockingly on Telegram after the ministers' meeting.

The oil embargo has hurt Iran's main supply of foreign revenues, while the banking sanctions have scared away foreign investors and made money transfers through official channels nearly impossible for businesses.

Europe tried to respond to the US withdrawal by setting up a special trade mechanism called INSTEX that would allow legitimate trade with Iran to continue without falling foul of US sanctions, but it has yet to become operational.

Iran has given Europe, China and Russia until July "to make their commitments operational".

Otherwise Tehran said it would stop complying with the nuclear deal's uranium enrichment restrictions and resume building a heavy-water reactor at Arak that was shut down as part of the deal.

The Gulf has been tense for weeks over increased strain between Iran and the United States on one hand, and the Islamic republic and US allies like Saudi Arabia on the other.

The tensions worsened after the US military announced it was dispatching reinforcements to the Middle East in response to alleged "Iranian threats" as well as the sabotage of four ships at the entrance to the Gulf on May 12.

Washington and Riyadh have accused Tehran of being behind those attacks, a charge it has dismissed as "laughable".

An international investigation found a "state actor" was likely to have been responsible for the attacks.

IAEA chief Yukiya Amano also said Iran's "production rate (of uranium) is increasing", although he was unable to give an exact figure.

Israeli Prime Minister Benjamin Netanyahu referred to the IAEA's assessment in a statement later, saying his country "will not allow Iran to develop nuclear weapons that threaten our existence and endanger the entire world".