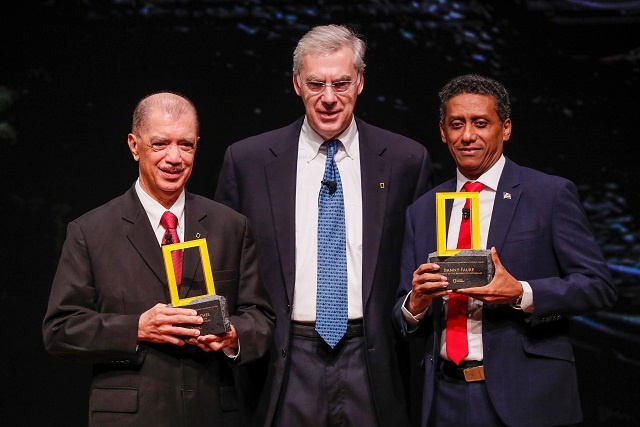 (Seychelles News Agency) - The President of Seychelles, Danny Faure, and former President James Michel received the Planetary and Leadership Award on Wednesday at the National Geographic Awards ceremony at the George Washington University, in Washington D.C.

The Planetary and Leadership award recognises a world leader who has successfully established globally significant protected areas, such as national parks, wilderness areas, or marine reserves, that are fully shielded from exploitation.

Faure dedicated the award to the people of Seychelles, State House said. He said that Seychellois citizens have a strong connection with nature and remain committed to successfully protecting and preserving the environment.

“With this award, the National Geographic Society is acknowledging the work we have done, and it is a powerful, emotional recognition of the longstanding vision of Seychelles and our journey so far, for me to be on this stage today,” he said.

The Seychelles’ head of state said the island nation is a champion of environmental conservation “because we believe in it. Since 1977, we have been convinced that protecting our environment is not just the right thing to do, but the necessary thing to do.”

Faure advised people and countries around the world to do the same.

On his side, former President James Michel thanked National Geographic for the award, saying that this was evidence and recognition of the society’s support in what Seychelles is doing. He also reiterated that there is one direction ahead.

“There is only one message of healing, conservation and sustainability. Our shared future is blue. The award that I am receiving today signals your own commitment. It will give heart to many people around the world who believe the same. Your foresight is deeply valued. I accept my award with pride and humility,” said Michel.

Other award recipients at the ceremony included groundbreaking leaders in the fields of exploration, science, technology, storytelling and conservation. Two new awards for exceptional achievement in education and philanthropic endeavours were also presented.

A day before the ceremony, Faure and Michel were received as honoured guests at a reception hosted by the National Geographic Society in Washington, D.C. on Tuesday.

The event was hosted by the President and chief executive of the society, Tracy Wolstencroft, who congratulated Seychelles for being at the forefront in the plight against climate change as well as for being advocates of a sustainable blue economy.

The achievements of the Seychelles’ current and former presidents over time in marine conservation were highlighted by speakers at the event. This included the expansion of the marine protection to 26 percent of the island nation’s Exclusive Economic Zone.

While in Washington D.C, the head of state of Seychelles, an archipelago in the western Indian Ocean, met with Mathew Brown, the regional director of The Nature Conservancy (TNC) on Wednesday.

The discussion focused on TNC's continued engagement with Seychelles and the way forward for the island nation’s debt swap.

The Nature Conservancy negotiated a deal that converts a portion of the Seychelles’ foreign debt into a $22-million investment in expanded marine conservation. The deal will allow the island nation to swap millions of dollars in sovereign debt for protecting nearly one third of its ocean area.

The Nature Conservancy -- one of the world's largest environmental non-governmental organisations -- provided technical and financial support to the debt swap to protect 30 percent of Seychelles' ocean territory.

Faure also called on the chief executive of the International Finance Corporation (IFC), Philippe Le Houerou where the Corporation's potential involvement in the greening of the Seychelles economy was looked at.