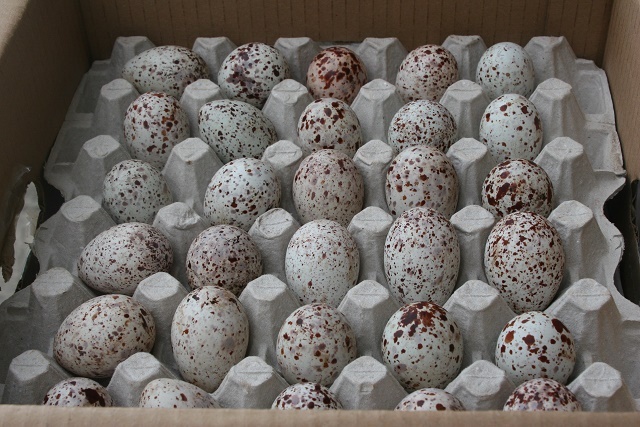 Sooty tern eggs, available from June until August are being collected only on Bird Island this year. (Seychelles News Agency)

A seasonal delicacy in Seychelles -- bird eggs -- are in short supply and high in price this year. Sooty tern eggs, available from June until August are being collected only on Bird Island - the northernmost island of Seychelles, this year.
Bird Island receives thousands of birds that come to the island to lay their eggs. SNA has been unable to speak with officials on the privately owned island despite sending several emails.
The Island Development Company (IDC), the other sooty tern egg supplier, has said through a communique that this year it is not doing a collection. This is part of an effort to harvest eggs in a sustainable manner. The collection on Desnoeuf Island is done every two years.
SNA learned that a carton of 180 eggs (six trays of 30) is being sold for S103 or $110. People SNA talked to have said that the eggs – smaller than chicken eggs - are turning out to be a luxury and very expensive: $.60 cents per egg.
“I think conservation is impacting our culture. In the late 1970s, I remember birds eggs were sold in Market Street. These could be found along the street in big wooden boxes. One could buy it however they pleased. These were the times of the schooners. Nowadays with all the means of transportation, the eggs are scarcer and is more expensive each year,” said Nanette Ernesta of Beauvallon.
Commonly known as ‘dizef zwazo’ in the native Creole language, the speckled egg has a bright orange yolk, compared to other eggs with yolks which are usually yellow in colour. It is a delicacy that can be cooked as an omelette, hard-boiled and eaten with a pinch of salt or prepared as a salad.
“Even if people are saying that the eggs are expensive, I love these and despite the price, I always buy same,” Renette Telemaque said. “After all you do not get to eat these all year round,” she added.
Linda Marie – a single mother of two – said the authorities should relook at the way this delicacy is managed.
“It is normal to have guidelines where the collection of the eggs are concerned, but I’m sure the sooty tern lays their eggs on many other islands. Why not collect from these islands as well? ” said Marie, referring to the 115 islands which make the Seychelles archipelago in the western Indian Ocean.
“For instance use prisoners for the collection. This will not only ensure supply so that people can buy every year but will also control the influx in price.”
Chantal Magnan of Anse La Mouche said “I do not really care about the eggs, I will not put an order or stand in long queues for the eggs. Therefore its availability on the market does not affect me.”
Another issue that has arisen this season is the issue of poaching. In its communique to the local press, IDC explained incidents brought to its attention.
“IDC has learned that some cartons of bird eggs with its logo there-on are currently in use. IDC would like to state that these are most probably boxes from last year that are being re-used by some other persons or agencies.”
SNA asked the Director General for Biodiversity Conservation and Management Division in the Ministry of Environment, Marie May Muzungaille if there were any reported cases of poaching.
“We have not received any, but we have already deployed our conservation officers on Desnouef and Resif – two other islands were the sooty tern are found in large numbers - for monitoring. We are also working closely with the rangers from Aride Island,” explained Muzungaille, adding that the monitoring will end when the sooty tern season ends in September.
General » Be a reporter: Write and send your article » Subscribe for news alert
Tags: sooty terns eggs, Bird Island, IDC, Desnoeuf, Resif, poaching