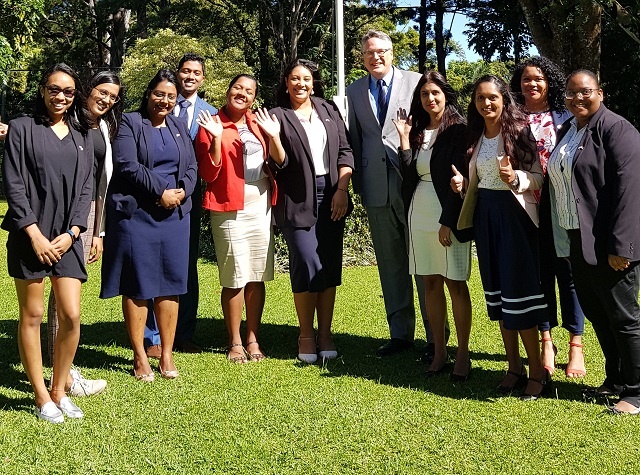 The chosen fellowship candidates announced in Mauritius include two Seychellois and eight Mauritian. (US Embassy, Mauritius)

(Seychelles News Agency) - Two citizens of Seychelles have been awarded the Mandela Washington Fellowship 2019, providing them with the opportunity to sharpen their skills at an American university.

The two Seychellois candidates -- Alexandria Faure and Beryl Payet -- were among 16 Seychellois who applied for the fellowship this year.

The announcement was made in a ceremony held at the US Embassy in Port Louis, Mauritius late last month in which eight Mauritian winners were also revealed. All the outstanding candidates who applied for the programme were also acknowledged.

Faure, who has a Master’s degree in Global Diplomacy, currently works at the Seychelles’ National Assembly as the head of the Public Relations and Protocol Department.

“This is such a unique opportunity, I'm nervous but I’m also ready to not only develop myself but learn from this big group of inspiring young people so that when I come back home I can contribute towards my job at the National Assembly and in the non-profit organisation that I am currently running,” said Faure.

After completing the Mandela Washington Fellowship, Faure plans to continue developing community projects under The Meraki Foundation with an additional focus on influencing policy and legislation.

“If we put our minds together and find innovative solutions to our common issues, we can overcome the many challenges we face, and the fellowship will be such a fertile ground for us to really learn from others who are really pushing for change in their home countries and to collaborate with each other,” she said

Faure hopes to continue working at the National Assembly “supporting and leading on outreach initiatives that will bridge the people with Parliament in a focused, engaging and positive way.”

The other Seychellois candidate, Payet, said she feels “blessed, ecstatic and honoured to have been awarded the fellowship.”

She is employed as the principal engineer of the policy and regulatory affairs section at the Department of Information Communication Technology (DICT). Payet will be following the leadership in public management track.

“I’m hoping to be empowered with new or enhanced public management and leadership skills that will enable me to grow and prosper within my organisation and career,” said Payet, who has a Master’s Degree in engineering business management.

Payet said she believes in knowledge sharing “so I will be heading home after the fellowship to share my experience and knowledge acquired with my colleagues.”

The Young African Leaders Initiative was launched in 2010 by former U.S President Barack Obama. In 2013 during a trip to South Africa, Obama announced the first Washington Fellowship aimed at empowering young African leaders to make a difference in their home countries.

This year 700 Mandela Fellows have been selected from across Africa. The fellowship will take place from June 19 to July 27 and will culminate with the Mandela Washington Fellowship Summit in Washington, D.C from July 29 to August 1.

The programme targets individuals between 25 to 35 years and is conducted as a merit-based open competition. All eligible applications are reviewed by a selection panel and the chosen semi-finalists are interviewed by the U.S embassies or consulates in their home countries.