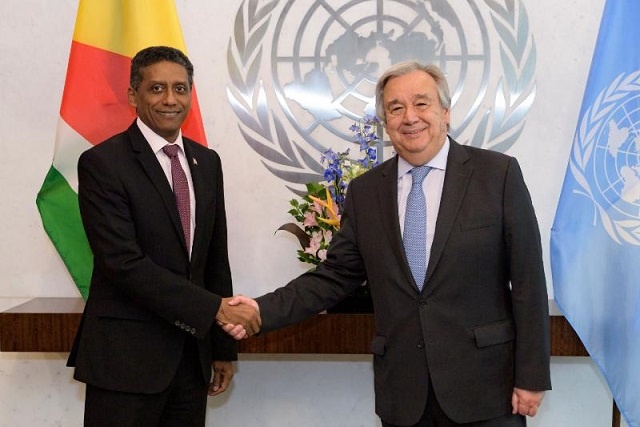 President Faure and the Secretary-General of the United Nations, António Guterres met at the UN headquarters in New York on Thursday. (UN Photo/Manuel Elias)

(Seychelles News Agency) - Seychelles’ leadership on ocean conservation and the Blue Economy were the primary focus of a meeting between President Danny Faure and the Secretary-General of the United Nations, António Guterres, at the UN headquarters in New York on Thursday.

According to State House, the Secretary-General commended Seychelles on its leadership as a champion of ocean conservancy and the Blue Economy and expressed his desire that President Faure attends the Climate Action summit.

The two leaders agreed that Seychelles and the United Nations system shared a very strong relationship and discussed the lead up to the much-anticipated Climate Action summit which the Secretary-General will host in New York on September 23.

Guterres also expressed great admiration for Seychelles’ leadership in sustainable development and governance, which he said was an example for the region and the world, in the meeting at the UN headquarters in New York, United States.

Faure informed Guterres that “Seychelles is well on track to protect 30 per cent of its 1.4 million-square-kilometre maritime territory by February of 2020, thereby achieving the 30x30 target a decade early.”

During the meeting, Faure sought the assistance of the UN system in his role as the African Union’s champion for the development of the Blue Economy in Africa. He also expressed the need to couple ocean conservancy and governance with maritime security and commended the assistance of the United Nations Office for Drugs and Crime (UNODC) in countering drug trafficking in the western Indian Ocean.

The Seychelles’ head of the state also presented the UN Secretary-General with a copy of the island nation’s coastal management plan 2019-2024. The plan which was drawn up in partnership with the World Bank addresses climate change effects Seychelles such as coastal erosion and flooding among others.

A complete ban on the manufacture, importation and use of plastic straws came into force on June 1 in Seychelles, an archipelago in the western Indian Ocean, in the latest effort to advance environmental protection. A ban on the importation of Styrofoam takeaway boxes, and plastic items such as carrier bags, plates, cups and cutlery took effect in January 2017.

Guterres also received a coco de mer which is the largest nut in the world and endemic to the Seychelles islands.

While in the United States, Faure also met with the chief executive of the World Bank, Kristalina Georgieva, on Thursday at the World Bank headquarters in Washington D.C.

Faure expressed his gratitude to the World Bank for its assistance in developing the Blue Bond while Georgieva heralded Seychelles for its leadership in the environment sector and inspiring other countries both in the region and worldwide.

The discussions included financing the Seychelles Coastal Management Plan 2019-2024 developed with the World Bank’s support. The plan looks at the necessary actions required to reduce the impact of erosion, flooding and other climate change effects on the country’s coastline.

Other projects and programmes will cost an estimated $13.1 million (SCR180 million) and the World Bank agreed to assist the Seychelles’ government in raising the necessary financing under the institution's climate change mitigation and adaptation portfolios.

Faure also followed up on the issue of marine debris he raised with Georgieva at Canada’s G7 summit in Charlevoix in June last year particularly on how to dispose of the waste cleaned from the beaches and the environment.

The World Bank gave its commitment to using its resources to push for ways to deal with plastic consumption and disposal and to identify technologies which will allow Seychelles and other countries to better deal with the waste washing up on their shores.

On the Seychelles’ side, the government will continue its efforts to keep the issue on the global agenda and maintain the island nation’s status as a leader on environment conservation and curbing the use of plastic.

The World Bank also expressed its desire to help Seychelles lower the climate and environmental impact of electricity generation.  The International Finance Corporation – a subsidiary of the World Bank – is already engaged with the government in exploring the potential use of liquified natural gas (LNG) to produce electricity.