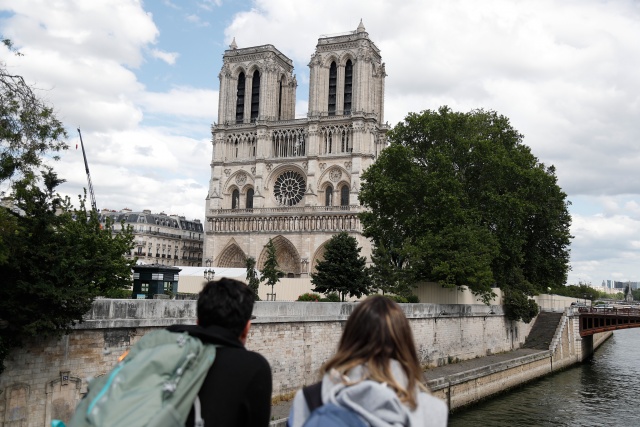 People look at the Notre-Dame de Paris cathedral from the banks of the River Seine, in Paris on June 15, 2019. The Notre-Dame cathedral in Paris will host its first mass on June 15, 2019, exactly two months after the devastating blaze that shocked France and the world. For safety reasons, the mass led by Archbishop of Paris Michel Aupetit will be celebrated on a very small scale. Worshippers will be expected to don hard hats but priests will be wearing their ceremonial garb. (Zakaria ABDELKAFI / AFP)

(AFP) - The Notre-Dame cathedral in Paris hosted its first mass on Saturday exactly two months after a devastating blaze, with priests and worshippers wearing hard hats to protect themselves against possible falling debris.

Dressed in a white robe and helmet, Archbishop of Paris Michel Aupetit led the service, which was attended by just some 30 people -- half of them clergy.

"The fire, which ravaged the building on April 15, has provoked a wave of emotion, not only for the community of believers," Archbishop Aupetit said in his sermon, broadcast live

"This cathedral is a place of worship, that's its true and unique purpose."

The mass started at 6:00 pm (1600 GMT) in the Chapel of the Virgin on the east side of the cathedral, confirmed to be safe.

Protective nets have been strung above the nave and choir and rubble still strews the floor but the pews have remained intact.

Aupetit was joined by the rector of Notre-Dame, Patrick Chauvet, other clergy, volunteers, people working on the restoration as well a handful of lay worshippers.

The date was chosen as it is the anniversary of the consecration of the cathedral's altar, which is celebrated every year on June 16.

The date is "highly significant, spiritually," Chauvet had told AFP ahead of the service, adding he was happy to be able to show that "Notre-Dame is truly alive".

President Emmanuel Macron has set an ambitious target of five years for restoring Notre-Dame, which was gutted by a fire on April 15 that felled its steeple and consumed the lattice of beams supporting the roof.

The diocese is awaiting a response from the French authorities over whether it can re-open the esplanade in front of the cathedral to the public.

If the authorities approve the plan, the idea is to celebrate evening prayers there, the diocese said.

The church has also floated the idea of erecting a temporary structure in front of the cathedral to welcome worshippers while the building is being repaired.

Up to 150 workers have been working at the cathedral daily since the fire, continuing to remove debris and stabilise the structure.

Two large white canopies have been put in place to ensure the edifice is protected, including from rain.

Macron's call for an "inventive" rather than identical reconstruction of the steeple has left some architects up in arms.

Meanwhile, legislation over the reconstruction has been blocked in parliament over disagreements between the upper and lower houses and is now only expected to be adopted at the end of July.

Pledges of some 850 million euros ($960 million) had been made from prominent French businessmen and ordinary citizens but only around 10 percent of that has been donated so far.

France Info public radio said just 80 million euros had been handed over, with businessmen giving the money in tranches and some private individuals renouncing their pledges due to the apparent success of the campaign.

Notre-Dame has figured as a central character through the ups and downs of French history since construction began in mid-12th century.

During the French Revolution in the 18th century, it was vandalised and plundered but went on to feature as a central character in a Victor Hugo's novel "The Hunchback of Notre-Dame" (1831) which is credited with helping save it.

It survived the devastation of two global conflicts in the 20th century and famously rang its bells on August 24, 1944, the day of the Liberation of Paris from German occupation at the end of the World War II.