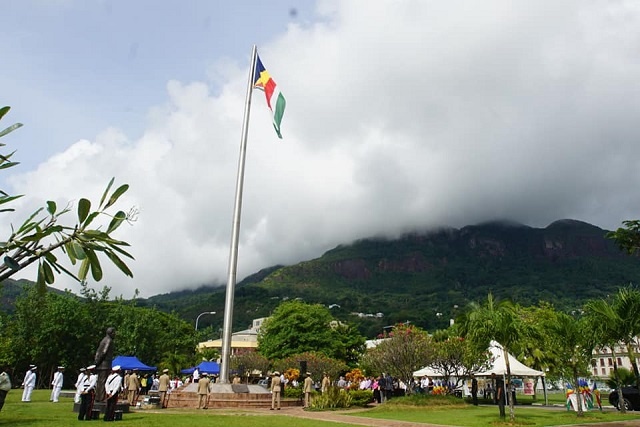 The national flag was hoisted in a special ceremony at the Peace Park to commemorate Seychelles' Constitution Day. (State House)

(Seychelles News Agency) - The Seychelles’ national flag was hoisted on Tuesday in a special ceremony at the Peace Park in the capital Victoria to commemorate the island nation’s Constitution Day.

The flag placed at the monument ‘Lavwa Lanasyon’ (the Voice of the Nation) was raised by the Seychelles Coast Guard in the presence of President Danny Faure, members of the National Assembly and representatives of the judiciary among others.

Since 2016, every year on June 18, Seychelles, celebrates the existence of the Constitution of its Third Republic, and this year was the 26th anniversary. The public holiday is called Constitution Day. Prior to 2016, the date was celebrated as National Day.

In a message for the day, the Citizens Democracy Watch Seychelles (CDWS) -- a not-for-profit organisation -- urged all citizens to take an interest in the Constitution and “to be a part of those who appreciate and understand that the Constitution is the very source from which essential tenets of a modern democracy flow.”

CDWS encourages every citizen to pause and reflect on the fact that the Constitution is a social contract governing relations in a society, between the people and their government and other institutions.

“As citizens become more involved in public life, the role of government needs to adapt and take greater account of this. The three arms of Government – the executive, legislature and judiciary -- must create the civic space for citizens to exercise their right to participate in public affairs either individually or through associations,” said CDWS.

Speaking to SNA after the ceremony, the Leader of the Opposition, Wavel Ramkalawan, said that this celebration is people governing themselves.

“We are celebrating a document that Seychellois have given to themselves, a document which contains our rights and responsibilities,” said Ramkalawan.

He said that it is important for all people in Seychelles to celebrate this day.

“Do not only look at it as a public holiday but reflect on what that document gives us as a nation. If we really know what the document entails, we can now live as a proud nation in dignity,” said Ramkalawan.

Jean-Paul Adam, the Minister of Health, told SNA that the Constitution is the supreme law that unites Seychellois.

“It represents values that all we all share as Seychellois. It gives us pride in what we have accomplished over the years as a nation,” said Adam.

An attendee at the ceremony, Karen Jeannevol, said, “We have come a long way as a small nation. The drafting of our Constitution marked the beginning of a strong and proud nation.”

Approved by the Seychelles parliament, the flag of the third republic was launched on June 18, 1996, under the new multiparty system. Made up of five oblique bands of blue, yellow, red, white and green, the current flag represents “a dynamic young country moving into a new future.”