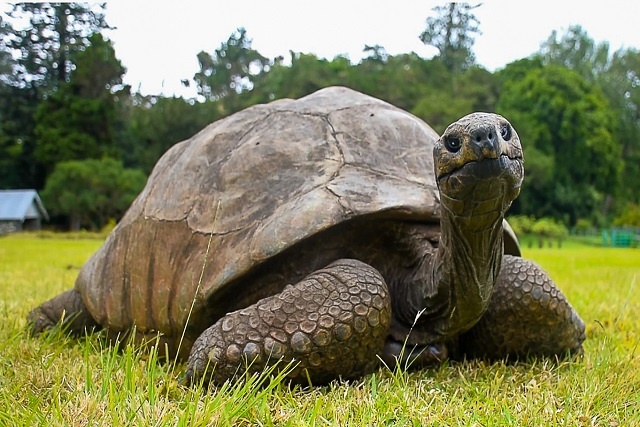 Jonathan is an endemic Seychelles land tortoise who currently resides on the remote island of St Helena.  (www.sainttravelltd.com)

(Seychelles News Agency) - Who is 187 years old and is from Seychelles? The answer, according to Guinness World Records, is Jonathan, the world's oldest animal on land.

Jonathan is an endemic Seychelles land tortoise who currently resides on the remote island of St Helena.

Transported there under the British administration in 1882, Jonathan was officially recognized as the oldest land animal in February this year.

Several methods were used to estimate Jonathan's age - the photographic evidence records when he arrived on St Helena aged 50 as well as scientific evidence such as his shell pattern composed of plates called scutes.

SNA caught up with St Helenian Jodie Scipio-Constantine, who vacationed in Seychelles in April, to get the latest updates about Jonathan.

“Jonathan leads a pretty lazy life! He gets up with the sun, grazes grass and natural herbs, and usually takes himself off to bed at about 5 pm. In the winter, when it rains and is cold, he slows down and will often sleep for several days between meals,” Scipio-Constantine told the agency.

Jonathan still resides at the Plantation House – one of St Helena’s landmark historical attractions and the official residence of the Governor.

The world’s oldest land animal is being cared for by the vets of St Helena government’s Agriculture & Natural Resources Division, the gardeners of Plantation House as well the Governor and his wife who are the curators of the house.

“Jonathan loves lettuce, cucumber, carrots, and apple – anything juicy. There are also a loquat and a Brazilian guava tree which Jonathan loves to eat their fruits,” explained Scipio-Constantine.

The World Guinness Record holder shares the manicured lawns of the Plantation House with three other giant land tortoises - Emma, David, and Fred - all from Aldabra Atoll, a UNESCO World Heritage site.

Antonio Constance – known as Mazaren, has had a long career spanning over 50 years, as a seafarer and knows the islands of Seychelles as the back of his hand.

Mazaren, has worked for many years on Aldabra – the native island for the giant land tortoises.

Now, a conservationist, Mazaren has learned a great deal about the giant land tortoise, whom he started to study in 1983.

“These creatures are fascinating. They can leave up to six months without drinking water and more interestingly they drink water through their nose.”

Mazaren was delighted to hear of Jonathan as a world record holder but expressed sadness as the tortoise is so far away from its home.

“I am against the idea of giving away our endemic species including the giant land tortoises. They should be here or on Aldabra, roaming their habitat as nature intended,” Mazaren added that people who want to see these fascinating creatures can simply visit the Seychelles – 115 islands in the western Indian Ocean.

Back on St Helena, one of the main vets taking care of Jonathan, Joe Hollins told SNA that Jonathan is fairing very well for his age and the plan is to use the record holder to build the tourism sector of the island.

“I did extensive work with Jonathan to promote him as an icon and a magnet for tourism, considered to be the future lifeblood of the island. This has included programmes for BBC Radio 4 - weekly audience 11 million, Radio 5 Live, and Dutch TV - with a viewing of 5 million,” explained Hollins.

According to Hollins, articles have also been written for various publications such as the Daily Mail, Telegraph, Times, Mirror, Fox News America, The Week, as well as several photographic sessions.

Already the celebrity receives many visitors including royalty – Princess Anne, the Princess Royale of Britain, who visited the island in November 2002. Jonathan is also featured on the St Helana’ 5 pence coin.