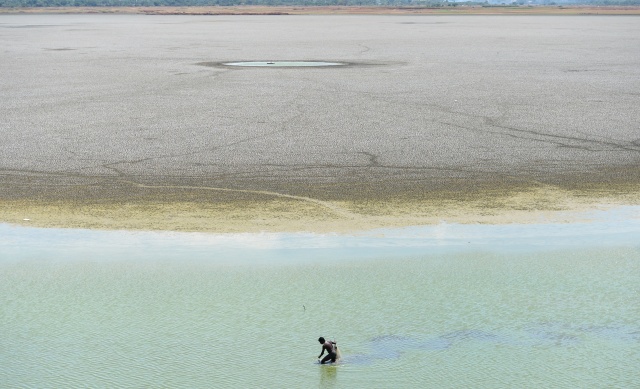 This photo taken on June 14, 2019 shows an Indian man searching for fish in a last bit of water in the dried out Puzhal reservoir on the outskirts of Chennai. Water levels in the four main reservoirs in Chennai have fallen to one of its lowest levels in 70 years, according to Indian media reports. (ARUN SANKAR / AFP)

Forty-nine people died in three districts of the Magadh region that has been hit by drought, he said.

"It was a sudden development on Saturday afternoon. People affected by heatstroke were rushed to different hospitals," Kumar added.

"Most of them died on Saturday night and some on Sunday morning during treatment."

Kumar said about 40 more people were being treated at a government-run hospital in Aurangabad.

"Patients affected by heat stroke are still being brought, the death toll is likely to increase if the heatwave continues."

Most of the victims were aged above 50 and were rushed to hospitals in semi-conscious state with symptoms of high fever, diarrhoea and vomiting.

State Chief Minister Nitish Kumar has announced a compensation of 400,000 rupees ($5,700) for the family of each victim.

Large parts of northern India have endured more than two weeks of sweltering heat. Temperatures have risen above 50 degrees Celsius (122 Fahrenheit) in the desert state of Rajasthan.

In 2017, researchers said South Asia, which is home to one fifth of the world's population, could see heat levels rise to unsurvivable levels by the end of the century if no action is taken on global warming.