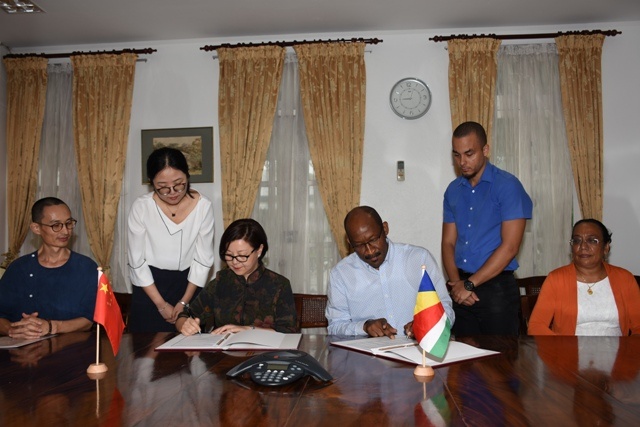 The agreement was signed between the Seychelles’ Vice-President, Vincent Meriton, and the Chinese ambassador to the island nation, Guo Wei. (Louis Toussaint)

(Seychelles News Agency) - Seychelles will receive $22 million in financial assistance for several projects, including a new previously announced technical and vocational school, through a grant from the government of China through a new agreement signed on Wednesday.

The agreement, which was signed between the Seychelles’ Vice-President, Vincent Meriton, and the Chinese ambassador to the island nation, Guo Wei, will support various economic projects brought forward by different ministries.

“The two countries will sit down together to discuss different projects that will receive the grant. There will be a technical group that will come from Beijing to meet with different ministries and other departments to see if there are any projects that could be implemented,” Meriton told reporters after the signing ceremony.

The grant of $22 million (SCR 300 million) is a new aid-free grant the Chinese government decided to provide to the island nation at the China-Africa cooperation forum in Beijing last year.

Meriton said that one major and key project that is expected to benefit from the grant is the creation of a new technical and vocational school.

The new institution was announced by President Danny Faure in his State of the Nation Address last year. The school is expected to open in 2020 on Ile Soleil, a man-made island on the east coast of the main island of Mahe.

On her part, Ambassador Wei said that she is confident that this new agreement will allow both countries to work well together.

“I am confident that this new agreement will enable us to accomplish together more beautiful projects of quality to put together the "eight major initiatives" proposed at the summit to reinforce our economic and technical cooperation,” said Wei.

She said that “during the last 43 years we have signed several economic and technical cooperation agreements. As part of these agreements, the Chinese government has provided various aid without preconditions.”

One of the main projects being funded by the Chinese government is the building of the Seychelles Broadcasting Corporation (SBC) House where the national radio and television will be based.

Wei said that in the course of the next two years the project will be completed.

The strong relationship that exists between China and Seychelles, a group of 115 islands in the western Indian Ocean, was also highlighted by the Chinese ambassador.

“The two countries have become friends and have always maintained relations based on mutual respect, legality and common development. The reciprocal political trust and exchanges at all levels have continued to intensify. The exchanges and cooperation in the commercial, cultural, educational, health and social fields are as fruitful as they are satisfying,” said Wei.

The grant will be administered by the Central Bank of Seychelles (CBS).

Seychelles and China have been developing relations since the establishment of diplomatic ties on June 30, 1976.

General » Be a reporter: Write and send your article » Subscribe for news alert
Tags: technical and vocational school, China-Africa cooperation forum, State of the Nation Address

Air Mauritius to begin twice-weekly flights to Seychelles in July