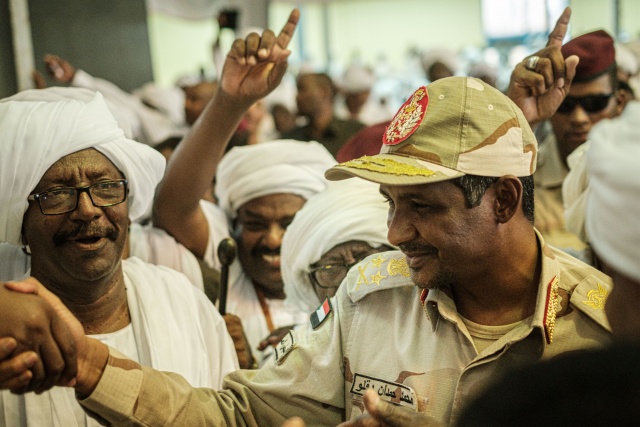 (AFP) - Sudan's army ruler Wednesday called on protest leaders to resume talks on the transfer of power without any conditions, as tension between the two sides persists after the bloody dispersal of demonstrators.

Dozens of protesters were killed and hundreds wounded on June 3 when a weeks-long protest camp was violently dispersed by gunmen in military fatigues, who stormed the site shooting and beating demonstrators outside the army headquarters in Khartoum.

The raid came after the collapse of earlier negotiations between the ruling generals and protest leaders in which they were unable to agree on who should lead a new governing body -- a civilian or soldier.

The generals, who seized power after the army ousted longtime ruler Omar al-Bashir on April 11, have resisted calls to hand power to civilians as demanded by the protesters.

Bashir was ousted after initial protests that erupted six months ago on December 19 over the tripling of bread prices morphed into a nationwide movement against his three-decades of iron-fisted rule.

But on Wednesday, Sudan's army ruler General Abdel Fattah al-Burhan said the ruling military council was ready to hold talks with the umbrella protest movement, the Alliance for Freedom and Change, and other political groups without any pre-conditions.

"We are calling on the Alliance for Freedom and Change and all political powers to come and sit without any conditions... we need a solution that satisfies all people," Burhan said in a speech in Khartoum broadcast on state television.

"The country has been without a government for three months... the Sudanese people and foreign policy have been affected by the lack of government," Burhan said.

The generals said last week that more than one coup attempt had been planned against the ruling military council since it took power, but they were thwarted and two groups of officers had been taken into custody.

Protest leaders insist an internet blackout imposed after they launched a civil disobedience campaign this month be brought to an end.

They are also seeking an international probe into the killings and the acceptance of all earlier agreements reached in previous negotiations with the generals prior to the crackdown.

Before the talks were suspended and the protest crackdown happened, the generals and protest leaders had agreed on a three-year transition period and the creation of a 300-member parliament dominated by lawmakers from the protesters' umbrella group.

Protesters and rights groups say the brutal crackdown was carried out by the feared paramilitary Rapid Support Forces led by General Mohamed Hamdan Dagalo, the deputy chief of the ruling military council.

"There are some groups raising suspicions about the RSF to try to get them out of the political scene, but the RSF are an integral part of the armed forces," he said.

The military council has expressed "regret" over what happened but insists it only ordered the clearing of an area near the protest camp where drug dealers had reportedly operated.

Analysts say the uprising that toppled Bashir risks losing the goals of freedom and democracy it set out to achieve.

"The guns remain divided, and the street remains formidable. The revolution is in great peril. Yet it is far from over."

Activists were also meeting residents in some neighbourhoods to keep the protest movement going as an internet blackout hindered in mobilising crowds, witnesses said.