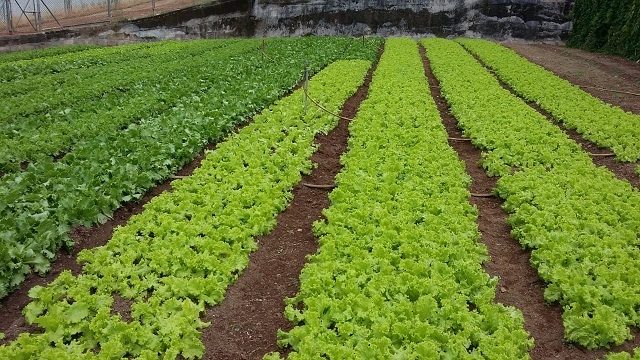 Farmers are being encouraged to cultivate and use the farmlands leased from the government at their maximum, particularly in regards to the production of pork and chicken for meat as well as 15 priority crops established for the agricultural sector. (Rosebelle farm)

In an attempt to revive and strengthen the agricultural sector of the island nation, graduates from the Seychelles Institute of Agriculture and Horticulture (SIAH) will now be allocated with agricultural lands to develop their farms.

The cabinet of ministers approved the new policy recently, facilitating graduates with access to parcels of state-owned lands for agricultural development.

“We realised that there is a large segment of our local farmers that are getting old and, for some time now, we have also noted that there are a lack of new blood entering the agricultural sector. If we do not pay attention to this, we would lose a whole generation of people who are producing food for the country,” explained Antoine-Marie Moustache, the Principal Secretary for Agriculture.

With young, freshly graduated aspiring farmers being offered the golden opportunity to own, in minimum, a hectare of land, it is hoped that this would boost food production as outlined in the recently launched comprehensive plan for agriculture.

Something that young farmer Marsha Radegonde feel is long overdue. “I graduated three years ago and it has not been easy. I was finally able, with a partner, to buy my own farm but I wished I could have been offered such an opportunity,” said Radegonde.

Radegonde who came out as the overall best student, winning the President’s Cup when she graduated, said that she hopes the students ‘make very good use of such golden opportunity.”

But the allocation of farmland to the graduates will have some conditions. ”In order to be considered the SIAH graduate should have undertaken a two-year course at the institution and should have accumulated three years of work experience on a farm after completion of studies” explained Moustache.

Students from past cohorts and who have been working in the agricultural sector for some time now will also benefit from this policy.

In another attempt to boost agriculture in Seychelles – 115 islands in the western Indian Ocean – unproductive farmers have had their lands taken.

According to the Seychelles Agricultural Agency (SAA), eight state-owned farmlands have been taken from farmers since October 2018. Eleven more farmers are also undergoing different phases of this land repossession process.

The chief executive of the agency, Linetta Estico, explained that the repossession is part of the government’s efforts to boost local farm production and ensure that farmlands are used to their fullest potential.

“This is line with the recent comprehensive plan for agriculture which was adopted by the Ministry of Fisheries and Agriculture in October last year and which has been pushed by the Food and Agricultural Organisation (FAO),” explained Estico.

Estico explained that in an exercise undertaken last year to evaluate whether farmlands were being used properly, the Ministry of Fisheries and Agriculture found that around 40% of agricultural lands were “not being valorised”.

“The recently introduced loans and marketing units for farmers are some of the mechanisms being used to encourage farmers to produce more,” said Estico.

Gabriel Prudence – a farmer from the southern district of Baie Lazare – told SNA that authorities have taken the right move. “A lot of people with farms are not really farming and instead are busy with their other business,” said Prudence.

Prudence added that: “Agriculture is a serious sector and opportunities should be given to only those who are really interested and whose heart is in the sector.”

Farmers are being encouraged to cultivate and use the farmlands leased from the government at their maximum, particularly in regards to the production of pork and chicken for meat as well as 15 priority crops established for the agricultural sector.

Estico added that SAA recognises the various challenges local farmers are faced with such as lands that are prone to flooding and lack of road access to farms. “In these cases, we sit down with these farmers to figure out how we can help them,” Estico concluded.

All state-owned lands used for agriculture are currently leased at a rate of $ 0.3 cents per square metre on an annual basis, a rate which would also be applicable to the young farmers who benefit from this policy.

The repossessed lands are expected to be put into the agricultural land bank and later tendered out to the interested estimated 137 farmers on the agency’s waiting list.