Johnson faces Hunt in battle to be British PM 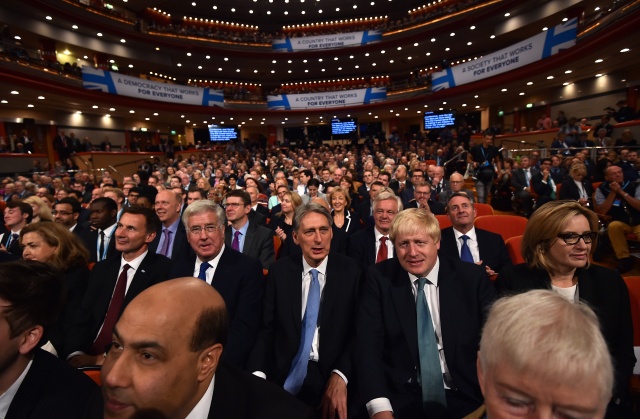 (LtoR) British Health Secretary Jeremy Hunt, British Defence Secretary Michael Fallon, British Chancellor of the Exchequer Philip Hammond, British Foreign Secretary Boris Johnson, and British Home Secretary Amber Rudd sit in the audience on the final day of the annual Conservative Party conference at the International Convention Centre in Birmingham, central England, on October 5, 2016. Brexit prompted the resignation of the UK's prime minister and the reshaping of the country's government, but the ruling Conservative Party has already rebounded and is showing a united front. The jubilant mood at the annual Conservatives conference is being led by its hardline eurosceptics -- for years the awkward squad within the party. (BEN STANSALL / AFP)

(AFP) - Boris Johnson will face Jeremy Hunt in a run-off to become Britain's next prime minister after a final ballot of MPs on Thursday, with the winner tasked with guiding the country through Brexit.

In the fifth ballot of MPs in the governing Conservative Party, former London mayor Johnson won 160 of the 313 votes, while Foreign Secretary Hunt earned 77.

Johnson said he was "deeply honoured" to have such emphatic backing from his colleagues, having won more than half the votes.

"I look forward to getting out across the UK and to set out my plan to deliver Brexit, unite our country, and create a brighter future for all of us," he tweeted.

Environment Secretary Michael Gove, who with Johnson had led the successful 2016 referendum campaign to leave the European Union, was narrowly eliminated after winning 75 votes.

The centre-right party's 160,000 grassroots members will now pick their new leader from the final two, who will then take over from Theresa May as prime minister in late July.

Both Johnson and Hunt have promised to take Britain out of the EU as quickly as possible, with the current exit date -- after two delays -- set for October 31.

Both say they want to renegotiate the deal May has already struck with Brussels -- which parliament has rejected three times -- but are prepared to walk away if necessary.

However, the EU has repeatedly said it will not change the text and the tough talk of "no deal", particularly from Johnson, has sparked frustration across the bloc.

As the result was announced in the House of Commons, May attended her final formal EU summit in Brussels, where the bloc's leaders warned her successors what to expect.

"Some of my colleagues have lost their patience," said Irish Prime Minister Leo Varadkar.

Hunt has suggested he might delay Brexit briefly if a deal with Brussels was close, and Johnson has refused to guarantee leaving on October 31.

But Varadkar said there was "enormous hostility" to a delay, saying it might only be acceptable to facilitate a snap election or even a second Brexit referendum.

May announced her resignation last month after it became clear she had lost the support of her Conservative MPs and could not get her Brexit deal through parliament.

Johnson was the frontrunner from the start and despite his history of gaffes, has barely put a foot wrong in the campaign.

Critics say this is because he has limited his public and media appearances, ducking one of two live television debates.

Both he and Hunt must now face the scrutiny of members at 16 hustings around Britain.

The pair will have their first televised head-to-head debate on ITV on July 9.

Both men have been accused of failing to explain how they will break the Brexit deadlock in just a few short months.

Business leaders are deeply alarmed by any talk of "no deal", which the Bank of England warned on Thursday was a rising risk.

Johnson is a divisive figure, accused of populist rhetoric and a lack of attention to detail that led to an underwhelming two years as Britain's foreign minister.

But he has wooed Conservative MPs with a promise that only he has the big personality to break the Brexit deadlock and, if necessary, win a snap election.

The smooth-talking Hunt is a more traditional foreign minister, although his supporters insist that beneath his easy manner is a tough negotiator.

Responding to the result, Hunt tweeted: "I do not doubt the responsibility on my shoulders -- to show my party how we deliver Brexit and not an election, but also a turbo-charged economy and a country that walks tall in the world."

Gove said he was "disappointed" but proud of his campaign.

His campaign manager Mel Stride said he did not think Johnson's team had been dabbling in the dark arts by lending votes to Hunt to knock out Gove.

"It would appear to me everybody has behaved pretty much as one would hope," he said.

Bookmakers give Johnson a 14 in 15 chance of winning the race -- but in the history of Conservative leadership contests, the favourite has never won.