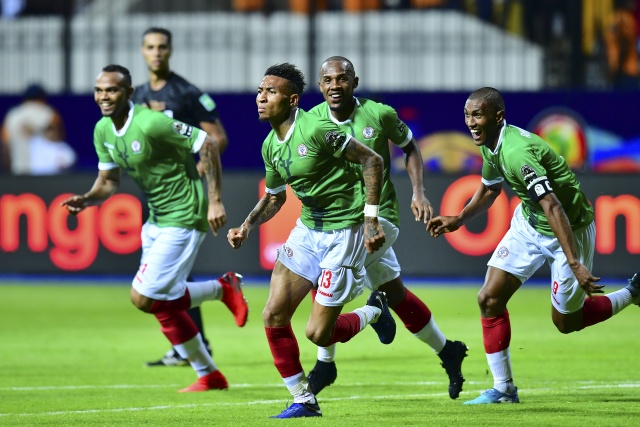 Madagascar's midfielder Anicet Andrianantenaina (C) celebrates his goal during the 2019 Africa Cup of Nations (CAN) football match between Guinea and Madagascar at Alexandria Stadium on June 22, 2019. (Giuseppe CACACE / AFP)

(AFP) - Africa Cup of Nations debutants Madagascar secured a first ever point at the tournament on Saturday after an entertaining 2-2 draw against Guinea in their Group B opener in Alexandria.

Guinea started without influential midfielder Naby Keita after his recent injury troubles but went ahead through Sory Kaba's confident finish on 34 minutes.

Indian Ocean islanders Madagascar, who were the first qualifiers for this year's tournament, replied early in the second half through Anicet Andrianantenaina.

They promptly took the lead when Charles Andriamahitsinoro produced a nerveless finish after latching onto a hopeful punt forward 10 minutes after half-time, but Francois Kamano salvaged a point for Guinea from the penalty spot following a foul on captain Ibrahima Traore.

Guinea failed to qualify for the 2017 edition but have made the quarter-finals in four of their past five appearances, although Keita was only fit enough for a place on the bench having yet to fully recover from a thigh injury that ruled him out of the Champions League final with Liverpool.

Madagascar, one of three teams appearing at the expanded 24-nation event for the first time, nearly presented Guinea with the opening goal just before the half-hour when Thomas Fontaine's header grazed against his own post.

They soon found themselves trailing though after Kaba's perfectly timed run left him clear of the defence, allowing the Dijon forward to latch on to a lofted Amadou Diawara pass and dink over Malagasy goalkeeper Melvin Adrien before rolling into an empty net.

Madagascar have their sights set on becoming the first newcomers since 2013 quarter-finalists Cape Verde to advance beyond the first round, and they pulled level on 49 minutes as Andrianantenaina glanced home at a corner.

Sory went close to restoring Guinea's advantage with a scuffed shot across goal that clipped the outside of the post, but instead Madagascar struck again when Andriamahitsinoro controlled a long ball forward with a deft first touch, using the second to clip beyond Guinea 'keeper Aly Keita.

However, their lead lasted barely 10 minutes with Guinea clawing their way back courtesy of a Kamano penalty that was awarded after Traore burst into the box and was scythed down by Romain Metanire.

Traore nearly snatched a winner for Guinea but couldn't guide his effort beyond the legs of Adrien, leaving both sides trailing group leaders Nigeria following a 1-0 win for the Super Eagles over first-time participants Burundi at the same venue.