A lemur on the loose again: King Julian won't be tied down 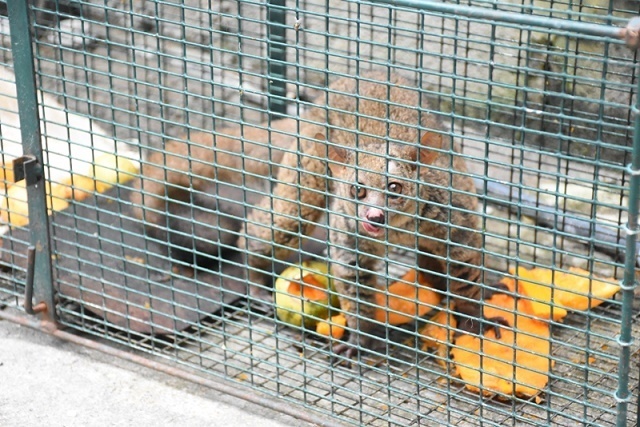 A lemur captured in February after being on the loose in Seychelles for almost a year is free once again.  (Seychelles Nation) Photo License:

(Seychelles News Agency) - This lemur refuses to be caged. A lemur captured in February after being on the loose in Seychelles for almost a year is free once again.

The lemur -- nicknamed King Julian locally – escaped on Saturday from the cage it was being held in, according to the Ministry of Environment, Energy, and Climate Change, and fled out an open window.

“After it was captured in February this year it was being kept at the VET service facility at Union Vale, while procedures were being made to return it to its country of origin, Zanzibar,” explained Pothin.

The Ministry was in contact with authorities in Zanzibar to organize the transfer but according to Pothin “as it is with any transfer of wildlife, it is not always easy, we were still negotiating with them.”

During that time it was decided that it was not an ideal place for the animal to be kept at the VET services as domestic animals mainly cats and dogs use the facility as well.

It was then decided to transfer the animal to a safe and secure location at the Nature Seychelles sanctuary at Roche Caiman.

“Visits were conducted and a suitable location was agreed upon. Arrangements were made for a new and bigger enclosure to be built for the animal,” explained Pothin, who added that In the meantime the animal was being kept at the Conservation office until the completion of the enclosure.

Apparently, the lemur managed to squeeze out of its cage and escaped through a window that was not closed properly.

Pothin said that traps are being set at different locations at Mont Fleuri. After a couple of days, these will be put at other sites including at Sans Soucis where it was captured.

“San Soucis is an ideal location for the bush baby. It is mountainous with forests, including lots of fruit trees and is quieter there as well,” said Pothin.

Lemurs are prosimians, one of two types of primates belonging to the family Lemuridae. They are native to Madagascar.

Asked about the potential spread of diseases by the introduced species, Pothin explained that as the lemur was kept under quarantine at the veterinary services where tests were conducted, the lemur was found to be free of diseases.

“We urge the members of the public to kindly assist us and report any sightings of the animal immediately by calling the greenline on 2722111,” said the conservation officer.

Species » Be a reporter: Write and send your article » Subscribe for news alert