Seychelles and Ethiopia plan to increase cooperation in trade, tourism and regional security 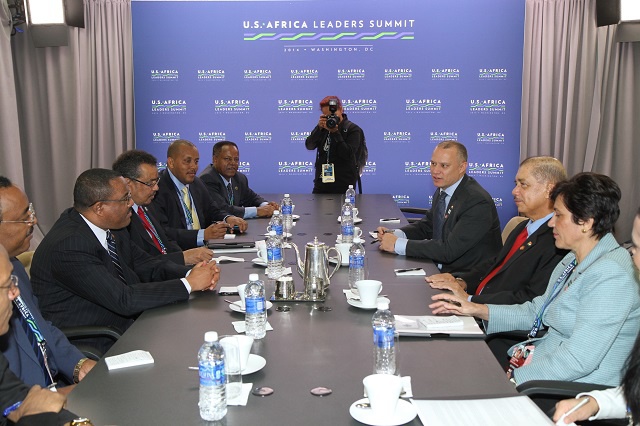 The Seychelles and Ethiopian delegations at the meeting in Washington in the margins of the US-Africa summit (Mervyn Marie, Seychelles News Agency)

(Seychelles News Agency) - Seychelles’ President James Michel and the Ethiopian Prime Minister, Hailemariam Desalegn have endorsed the creation of a joint commission between their two countries following talks which centred on the possibility of strengthening cooperation in various fields between the two African nations.

In a press statement issued yesterday evening, state House said trade, tourism and regional security were amongst issues discussed by Michel and Desalegn, who met in the margins of the US-Africa Summit, in Washington.

According to the statement, Michel noted that Seychelles and Ethiopia enjoyed excellent relations adding that they would work towards developing collaboration at different levels.

"I believe that the time has come for us to strengthen our relations both bilaterally and at the level of the African Union. There is so much we can do together," said Michel.

The Seychellois head of state also highlighted the return of Ethiopian Airlines to Seychelles soon, which he said would help boost economic cooperation namely trade and tourism between the two African nations.

News of Ethiopian Airlines’ plans to resume flights to Seychelles surfaced mid-March this year not long after its last flight to the Indian Ocean archipelago.

The Ethiopian carrier had been operating three weekly flights to the island nation since the first quarter of 2012 before it stopped on March 01, 2014.

Ethiopian Airlines is now expected to resume direct flights between Addis Ababa and Seychelles as of October 01, 2014.

With fish being one of the main pillars of the Seychelles economy, the possibility of the island nation exporting fish to Ethiopia and working on capacity building in the fisheries sector was also discussed.

"Seychelles' fisheries products can be exported to Ethiopia and at the same time Seychelles can import vegetables and other products from Ethiopia. This would be a win-win situation....,” said Michel.

For his part, the Ethiopian Prime Minister said that that his country would welcome investors from Seychelles for mutual benefit.

Seychelles and Ethiopia have already signed a Double Taxation Avoidance Agreement (DTTA) in July 2012, the same year which saw the accreditation of ambassador Joseph Nourrice as the archipelago’s first resident ambassador to Ethiopia.

Aside of trade and tourism; security in the region, in particular piracy issues and terrorism were also discussed with both sides agreeing that they can work together to enhance security in the African region.

“(……) Security is crucial for our region, we are small but prepared to make our contribution to peace and security of the region, including to the African Union peacekeeping missions in the region. We have set up REFLEC3 for information gathering and intelligence sharing and have invited partners from the African region to participate and collaborate in the exchange of information to fight terrorism and other forms of crimes," said Michel.