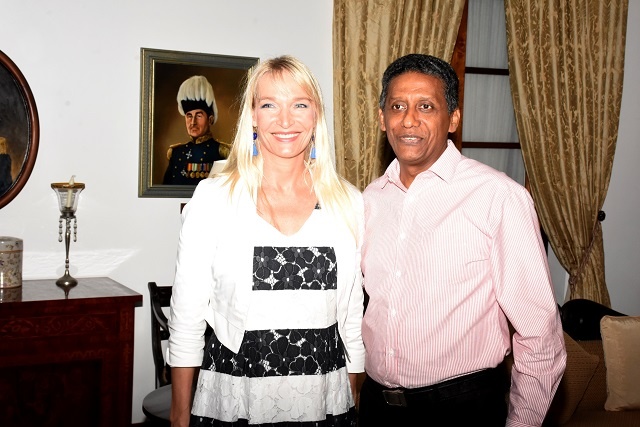 (Seychelles News Agency) - The fisheries and economic partnerships between Seychelles and the European Union (EU) are solid, the outgoing Ambassador of the EU to Seychelles said on Tuesday.

“Thanks to the fisheries and economic partnership agreements with Europe, Seychelles has become one of the top countries to export tuna to the EU markets. Europe is the biggest destination of Seychellois exports - over 50 percent of Seychellois exports go to the EU market. Hence, most of the foreign investment coming to Seychelles is European,” Sall told journalists.

Sustainability of the ocean is a key priority for the EU and Sall said that the EU “fishing fleet base is fishing on the scientific advice by the regional bodies in relation to the strength of the stocks.”

She added that Seychelles and the EU are partnering in areas of joint interest and of common values. The focus has been placed on climate change, environment and business.

“We have been working a lot also in terms of fighting domestic violence and strengthening of the institutions like the Anti-Corruption Commission of Seychelles, or strengthening the electoral framework during last elections,” said the outgoing ambassador.

In the meeting at State House, the President of Seychelles, Danny Faure, thanked Sall for her hard work in strengthening the partnership between Seychelles and the European Union, in particular, her focus on delivering high-impact community-based projects.

In November 2018, a shelter for women of gender-based violence --  a hidden refuge against dangerous situations fully funded by the EU --  was opened in Seychelles, an archipelago in the western Indian Ocean.

Sall said that she is happy to see that the EU-Seychelles Partnership is strong and that during her four-year mandate the political dialogue was a key area of cooperation.

Held on a yearly basis with the Seychelles’ government and president, the dialogue saw the participation of numerous non-resident EU ambassadors which Sall said “shows the strength of this partnership.”

Sall said that the European Commission has made a proposal on funding which goes to its external partners.

“That proposal has an increase of 30 percent of funding to EU’s external programmes. Obviously, it's a proposal from the European Commission which has to be accepted by the European member states and European Parliament. But this is a proposal for the duties and I think you can see it's a very strong proposal to continue the EU’s strong role with all of its external partners” said Sall.

The outgoing ambassador’s next post will be at the Finnish Foreign Service in Helsinki, Finland.