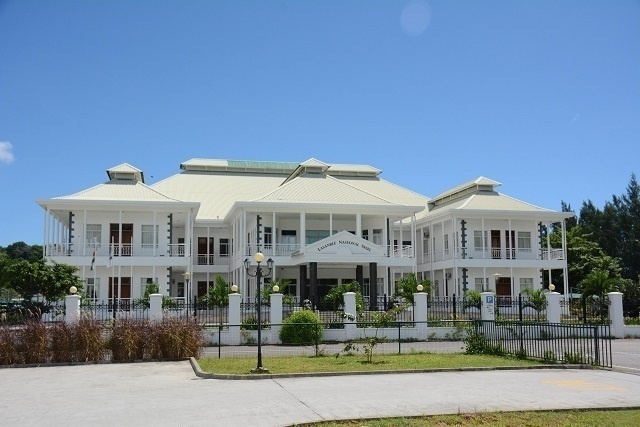 The two leaders in parliament, Wavel Ramkalawan and Charles De Commarmond both condemned the action and appealed to the police to expedite the investigation. (Joena Meme)

(Seychelles News Agency) - The Seychelles’ National Assembly has condemned an incident in which an Indian national was shot and another assaulted in an attempted armed robbery in the central Mahe district of Bel Air on Tuesday.

According to the police, the two Indian nationals were injured during a scuffle when trying to disarm a 28-year-old Seychellois man who was trying to rob the Bel Air Store armed with a pistol.

The suspect, who was brought before the Supreme Court on Wednesday, has been remanded in police custody until July 10.

In the incident Tuesday evening, both victims managed to disarm the assailant and called for backup from passersby and the police. The Indian national who was shot in the chest is still hospitalised while the second man was treated for an injury to his head and later released.

In its session on Wednesday, the two leaders in parliament, Wavel Ramkalawan, Leader of the Opposition, and Charles De Commarmond, the Leader of Government Business, both condemned the action and appealed to the police to expedite the investigation.

Ramkalawan said the commotion led to panic among the community and people are now fearful that such an incident could be repeated.

“The robbery at gunpoint is a clear indication that there are weapons in circulation in Seychelles, which should not be the case. This is a bad image for our country which is a tourist destination,” said Ramkalawaan.

He added that as politicians, his party wants to send a clear message that “Seychelles is a peaceful country where people live in harmony and where violence of any sort is not tolerated. We as politicians condemn such despicable acts we stand in solidarity with the victims and their families.”

De Commarmond said such actions could destabilise the country.

“Such violence can affect the Seychellois way of life, our peace, stability and unity. We always welcome all nationalities to our shores and live in a harmonious way. Today I would like to tell the Indian community and the retailers’ community that we stand in solidarity with them following this unfortunate incident,” he said.

Both leaders also deplored the fact that a civilian was in possession of a weapon and called for an in-depth investigation into the incident and a thorough inventory by the police and the military to track all guns registered and issued in Seychelles.

In a press conference on Wednesday, the Police Department said the gun used in the assault was not issued from its armoury or that of the military.

The deputy commissioner Romano Songor said, “The gun was outdated and was no longer in operation. We are sending it abroad for further tests to identify its origin. It seems that it originates from Asia but we cannot confirm from which country at this point.”

The Commissioner of Police, Kishnan Labonte, reassured the public that the country was safe and the police were following a number of leads.

He commended the public who came out in force on Tuesday night to assist the Indian shopkeepers while awaiting the police.

Guns are illegal in Seychelles, a group of 115 islands in the western Indian Ocean. They are used only by military personnel and the police.