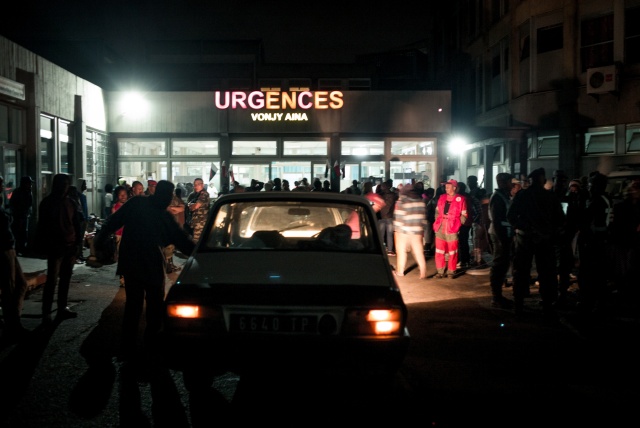 People gather outside the emergency department of Joseph Ravoahangy Andrianavalona Hospital (HJRA) in Antananarivo late on June 26, 2019, after at least 16 people died and dozens were injured during independence day celebrations. At least 16 people were crushed to death and dozens injured in Madagascar on June 26 at a stadium hosting national independence day celebrations in the capital Antananarivo. The bodies of sixteen victims, including three children, were stored at the mortuary of HJRA hospital in the city, AFP journalists said. (RIJASOLO / AFP)

(AFP) - At least 16 people were crushed to death and dozens injured in Madagascar on Wednesday at a stadium hosting national independence day celebrations in the capital Antananarivo.

The bodies of sixteen victims, including three children, were stored at the mortuary of HJRA hospital in the city, AFP journalists said.

According to witnesses at the hospital, the accident occurred in the afternoon outside the Mahamasina stadium, where several thousand people had gathered for a concert following the traditional military parade held to mark the national holiday.

At the end of a military parade, security forces opened the gates to allow spectators to leave the enclosure, causing the crowd to mass outside the stadium, witnesses said.

The police then immediately closed the gates and blocked the crowd, witnesses said, causing a deadly pile up.

"When the organizers opened the gate, we were in the front row, in the queue," said Jean Claude Etienne Rakotoarimanana, 29, who suffered bruises from the crush.

"Suddenly people ran to get in front of us. They shoved us, some even punched us and pulled us," he added, saying he then fainted.

Madagascan President Andry Rajoelina, at a press conference with Rwandan counterpart Paul Kagame, offered his condolences over the tragic deaths.

"There were too many people unable to enter the stadium," which led to the problem, he said, adding that the state would take care of the hospital bills of those injured.

Rajoelina visited the hospital taking care of those injured in the stadium crush.

In September 2018, a deadly crush killed one person and injured 30 people in similar circumstances at the entrance of the same stadium during a football match between Madagascar and Senegal.

On June 26, 2016, exactly three years before Wednesday's deadly crush, a bomb was detonated during a free concert in the Mahamasina stadium, killing three people and leaving scores more injured.