African islands should be included in US’ investment programmes says Seychelles president Michel. 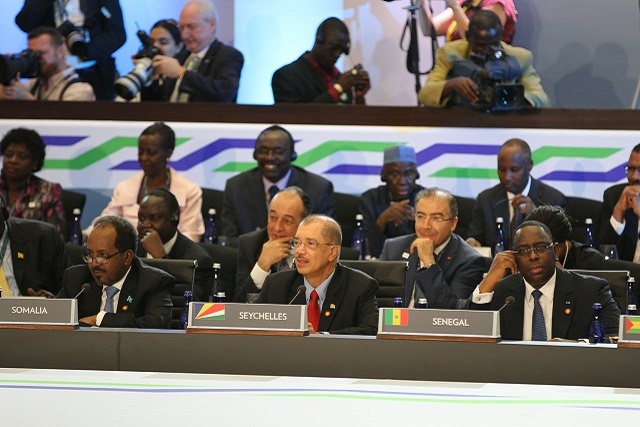 (Seychelles News Agency) - The Seychelles President, James Michel has used his address at the US-Africa summit to highlight the importance of the Small Island States of Africa and the Blue Economy.

Michel yesterday addressed the over 40 African leaders and the US President Barrack Obama gathered in Washington on the last day of the historic summit.

In a press statement issued yesterday evening, State House said Michel called on the US government to develop a stronger relation with the African islands and to seek innovative ways so that the small island states of the continent can be included in its investment programmes.

"I think we must not forget that Africa is not only the mainland Africa but is also made up of African islands......These islands should not be marginalised as we develop the concept of partnership, because we are small, we don't have the economies of scale, sometimes we are left aside," he said.

Plans to build dams and railway lines which will benefit different countries of mainland Africa under the US’ Power Africa programme is one example which Michel said would not benefit the islands of Africa, calling for them to be included in future programmes such as solar energy.

The Seychellois head of state nevertheless commended the US government for the recently organised Oceans summit in Washington recently which saw the participation of the island nations Minister for Natural resources Peter Sinon as well as the work of the African Union to promote the Blue Economy concept.

Michel also talked about the importance of environment protection where he highlighted Seychelles efforts in that area, noting that the island nation has over half of its land territory protected as natural reserves as it strives to ensure sustainable development.

Development is based on the stability of African states

The Seychellois head of state also shared with his African counterparts the experience of Seychelles economic reforms.

On the issue of youth empowerment which he described as key, Michel commended Obama’s Young Leaders initiative while not stopping short of suggesting that each country should come up with their own concrete programmes to empower their young people.

Michel took the opportunity to speak about the Seychelles' own Young Leaders Programme, where he said “academic study is complimented by education in the communities, where the communities are their classroom,” reads the statement.

The State House says the US President Barrack Obama responded to Michel’s address saying “….those are excellent points. Obviously working together on maritime issues, issues with respect to enormous resource that are our oceans, dealing with pollution, dealing with making sure that fish stocks in the oceans are sustainable, dealing with climate change, those are all areas where we are seeking cooperation."

At the end of the summit themed "Investing in the Next Generation" Obama thanked the African leaders for taking part in the summit which he has described as an extraordinary event.

Obama described the dialogues over the three days as "genuine discussions -- a chance to truly listen and to try to come together around some pragmatic steps that we can take together."

He has also pledged that the US will hold another such gathering.

“I'll strongly encourage my successor to carry on this work because Africans must know they will always have a strong partner in the United States of America," he is reported saying by the BBC.

Some $37 billion have been pledged for various initiatives in Africa and the United States has also committed to help African nations set up a rapid response force to support United Nations and African Union peacekeeping missions on the continent.