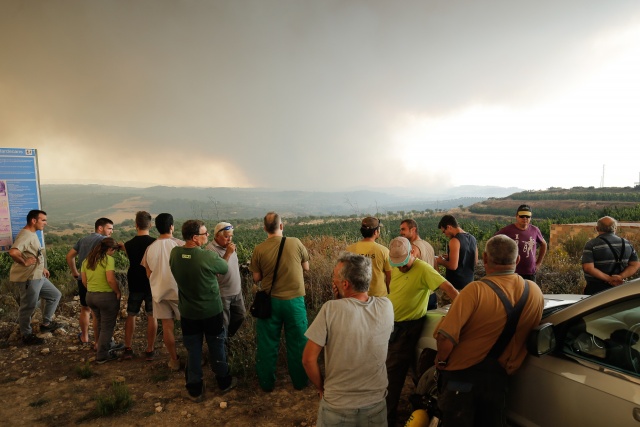 Residents gather to observe a forest fire raging near Maials in the northeastern region of Catalonia on June 27, 2019. A Spanish forest fire raged out of control amid a European heatwave, devouring land as hundreds of firefighters battled through the night, local authorities said. (Pau Barrena / AFP)

(AFP) - Temperatures in France are expected to reach a record-breaking high on Friday, as Europe continues to endure a sweltering heatwave which sparked an out-of-control wildfire in Spain.

Governments warned citizens to take extra precautions, with the week-long heatwave causing a build-up of pollution and fears of an increase in emergency calls across Europe.

French meteorologists have forecast temperatures that may exceed 45 degrees Celsius on Friday, a high never seen in mainland France.

The current record was set in August 2003 in the southern region of Montpellier and Nimes, when the thermometer hit 44.1 degrees Celsius.

"To beat this record so early in the year would be exceptional," said meteorologist Christelle Robert.

The average maximum temperature recorded Wednesday in France of 34.9 C was already a record for the month of June, said state weather forecaster Meteo France.

French President Emmanuel Macron warned that such extreme weather is likely to become more frequent as a result of global warming.

"We will need to change our set-up, our way of working, build differently," he said, stressing a necessary "adaption of society and its habits."

French Health Minister Agnes Buzyn on Thursday said people had to be prepared for the peak of the heatwave and expressed irritation that some appeared not to be listening to advice.

She complained about parents leaving their children in the car and joggers exercising in the midday heat.

A forest fire in Torre del Espanol in Spain's northeastern Catalonia region raged out of control, devouring land despite the efforts of hundreds of firefighters.

Catalonia's forest agent service said the fire likely began when an "improperly managed" pile of manure at a chicken farm self-combusted in the extreme heat.

Some 350 firefighters backed by around 230 soldiers and 15 aerial tanker aircraft were at the scene of the blaze on Thursday.

"The situation is critical," said fire service chief Antonio Ramos. "We haven't seen a fire like this (in the region) in 20 years."

With temperatures expected to reach up to 42 C on Friday, Spain has issued a "red level" warning to its population.

In the Italian city of Milan, a 72-year-old homeless man was found dead at the main train station after falling ill due to the heatwave, the local authorities said.

As Germans attempted to cool off amid scorching temperatures, at least four people died in bathing accidents in different parts of the country on Wednesday.

Some areas of the country were experiencing water shortages and some residents in the North Rhine-Westphalia state were told to only use drinking water for vital purposes or face a 1,000- euro ($1,137) fine.

There has been no coordinated shutdown of schools but some have closed in parts of France, while others advised parents to keep children at home.

In Paris, Lyon, Marseille and Strasbourg, authorities have banned the most-polluting cars from the roads.

Residents of the French city of Grenoble were unable to use two municipal swimming pools despite the record temperatures, due to a row sparked by use of the full-body Islamic burkini swimsuit.

Lifeguards had asked for the shutdown after Muslim women clad in burkinis had gone to swim in defiance of a municipal ban.