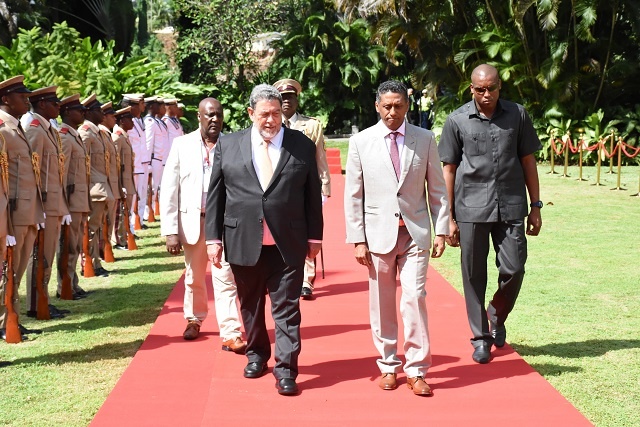 The Prime Minister was welcomed by President Faure at State House for an inspection of the guard of honour ceremony. (Joena Meme)

(Seychelles News Agency) - The Prime Minister of St. Vincent and the Grenadines, Ralph Gonsalves, has arrived in Seychelles on his first state visit.

Gonsalves was greeted by a delegation led by the Designated Minister, Macsuzy Mondon, upon arrival at the Seychelles International airport at Pointe Larue on the east coast of the main island, Mahe, Friday morning.

Shortly afterward, the Prime Minister of St. Vincent and the Grenadines was welcomed by President Danny Faure and his Cabinet of Ministers at State House for an inspection of the guard of honour ceremony.

The ceremony was followed by a meeting between the two leaders.

The Prime Minister is in Seychelles, a group of 115 islands in the western Indian Ocean, on a two-day visit at the invitation of President Danny Faure. The two leaders met last September on the margin of the United Nations General Assembly in New York.

During his two-day official visit, Gonsalves will hold bilateral talks with other government officials on areas of cooperation in the blue economy, tourism, environment, fisheries among others.

Like Seychelles, St. Vincent and the Grenadines is a small island state. Located in the Caribbean, it has a population of about 110,000 people, just more than Seychelles' approximately 95,000 people.

On Saturday, the Prime Minister will also fly to Praslin, the second-most populated island, for a visit to the UNESCO Heritage site of Vallee de Mai where the biggest nut in the world, the coco-de-mer, grows.

The highlight of Gonsalves’ visit will come when he serves as guest of honour at the Seychelles’ national day celebration ceremony on Saturday, June 29.

Several activities are organised to commemorate the day, including a military parade at the Unity Stadium at Roche Caiman a central district on the main island of Mahe as of 6 p.m.