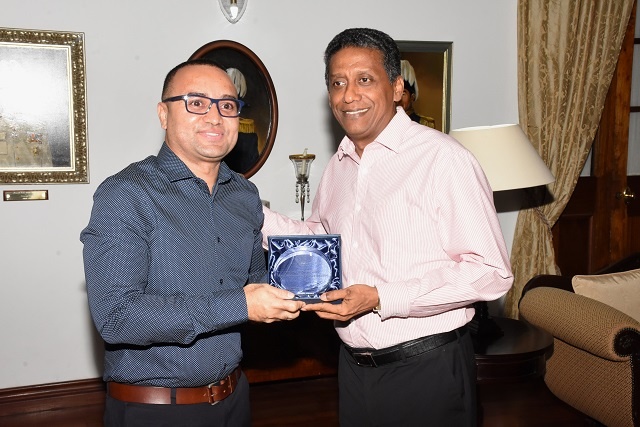 The President of Seychelles, Danny Faure, congratulated the Secretary of State for winning the award on Tuesday at State House. (Louis Toussaint)

(Seychelles News Agency) - The Seychelles’ Secretary of State for finance, trade and investment, Patrick Payet, has received the 2019 Best Sustainable Finance Solution Award given for the first time at the Adam Smith awards gala presentation in London.

“With the knowledge that there were in total 244 nominations from 30 countries represented in the different category, winning the award is truly a prestige honour,” Payet told SNA on Tuesday.

The Best Sustainable Finance Solution, which is a new category for the 2019 Adam Smith Award, recognises the steps companies and organisations are taking to address the environmental, social and governance issues when arranging finance.

The Secretary of State from Seychelles received the award in recognition of his efforts which led to the issuance and establishment of a framework for the world’s first sovereign ‘blue bond’ last year.

The President of Seychelles, Danny Faure, congratulated the Secretary of State for winning the award on Tuesday at State House.

Faure said that “Seychelles is honoured to celebrate this accomplishment which not only raises the Seychelles’ flag in a new sphere but reflects the continuous hard work and devotion of public servants.”

Payet told SNA that winning the award “shows the teamwork that exists while working on the blue bond project itself. The hard work has shown result at the end of the day.”

He added that the sovereign blue bond -- the first of its kind -- could serve as a model for other Small Island Developing States and coastal countries.

“This shows that even if we are small, we have smart people that could find a solution to an existing problem,” he said.

The Adam Smith Award is a universally recognised award as the ultimate industry benchmark for corporate treasury achievement and showcases the successes of treasurers, chief financial officers, finance directors and their teams in placing corporate treasury in the spotlight.

Competition for these coveted awards is extremely strong and the winners had to demonstrate exceptional best practice, innovation, collaboration, creativity, teamwork and determination in order to be recognised.

Payet said that the whole concept of sustainable finance solution is really important for Seychelles, a group of 115 islands in the western Indian Ocean.

“Like many small island states, Seychelles’ economy is highly dependent on fisheries, marine habitats and other blue economy sectors such as tourism. As the economy grew and fisheries became more exploited, Seychelles recognised the need to protect and rebuild fish stocks through improved governance and management,” he said.

Freedom of information bill to be sent to Seychelles’ National Assembly, Vice-President says