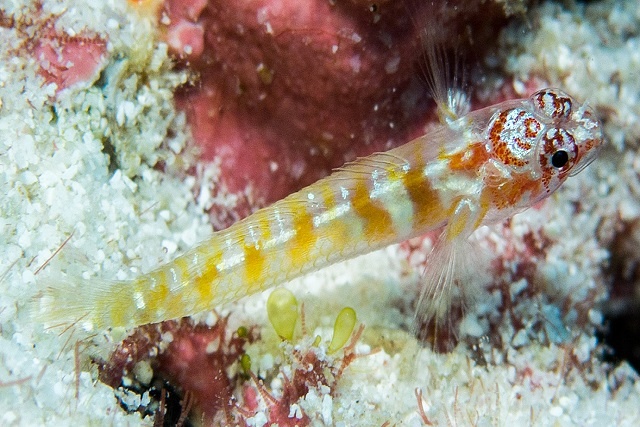 The species, eviota dalyi, was discovered at the remote outer island of D’Arros in 2017. It was recently confirmed as a new species.  (Ryan Daly, Save our Seas Foundation)

A new fish species belonging to the dwarf goby group has been discovered in Seychelles by researchers of the Save our Seas Foundation (SOSF).

The species, eviota dalyi, was discovered at the remote outer island of D’Arros in 2017. It was recently confirmed as a new species.

The discovery was made by Ryan Daly, the fish’s namesake, who was the director for D’Arros Research Centre based on D’Arros Island in the Amirantes group of the outer islands of Seychelles.

“This is exciting news for science and illustrates the significance of Seychelles from a conservation perspective. The sheer scale of new descriptions for the seas around St Joseph Atoll near D’Arros Island reminds us of how much we still don’t know about our oceans.’

Daly added: ‘Aside from discovering this new little fish, our team increased the number of known species in the area from 220 to 514 in just 19 survey days.’

According to taxonomist David Greenfield, an expert on the fish in this group, one of the most striking features of eviota dalyi is its unique colour pattern, comprising bright red-and-white markings on its head and orange and yellow bars crossing its translucent body.

“They are also distinctive and not similar to any of the 116 other species of dwarf goby,” said Greenfield.

Greenfield’s full description was published in the June 2019 issue of Journal of the Ocean Science Foundation.

Little is known about the dwarf goby group, to which the new species belongs to. But the Philippine goby, as it is also referred to is a tropical species of fish in the subfamily Gobionellinae from brackish water and mangrove areas in Southeast Asia. It is one of the smallest fish species in the world.

The discovery comes in the wake of an SOSF-led rapid biodiversity assessment, which confirmed an exceptional diversity of species living within the marine ecosystems of these remote islands.

‘This discovery demonstrates the incredible biodiversity around D’Arros Island and St Joseph Atoll and showcases the need to further protect this “Aldabra of the Amirantes” for Seychelles and its people,’ said Michael Scholl, chief executive of the foundation.

The director-general for Biodiversity Conservation and Management Division in the Ministry of Environment, Marie May Muzungaille, told SNA on Friday that the Ministry is delighted with this news.

“This is very good and exciting news.  Because the D’Arros and St Joseph Atoll is a place of amazing area in terms of conservation and biodiversity richness. We are excited at the prospects of new species being discovered in the area,” said Muzungaille.

In fact, the discovery of multiple new marine species is a real possibility as Muzungaille revealed that the Nekton expedition which took place in Seychelles – 115 islands in the west of the Indian Ocean - in March and April, collected around 1,400 specimens in the island nation’s waters.

Founded in Geneva, Switzerland, in 2003, the Save Our Seas Foundation is a philanthropic organisation that aims to protect and care for the world’s oceans. Its support for research, conservation and education projects worldwide focuses primarily on endangered species of sharks, rays, skates, and their habitats.

Species » Be a reporter: Write and send your article » Subscribe for news alert
Tags: eviota dalyi, of D’Arros, St Joseph Atoll, Save our Seas Foundation